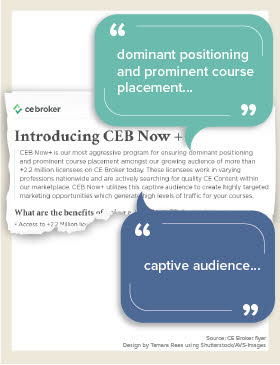 The email read like a marketing pitch that Dr. Lance Roasa normally would readily delete, but the sender caught his eye.

It was a company that had just assumed an influential job working with providers of continuing education for veterinarians.

The company, CE Broker, was contracted to streamline and centralize the system through which continuing education courses for veterinarians and veterinary technicians in the United States and Canada are approved, completed and tracked.

One of several solicitations that Roasa’s education business, drip.vet, received from CE Broker touted a program called CEB Now+ that would give participating providers “premium positioning for courses” being considered by a “captive audience” of veterinary licensees, in return for a 60% cut of the providers’ revenues.

Roasa, a veterinarian and lawyer, saw it as a classic “pay-to-play” offer. “Whoever pays the most gets your listings higher,” he said.