UK should use Budget to phase out furlough scheme, think-tank advises

UK should use Budget to phase out furlough scheme, think-tank advises

Chancellor Rishi Sunak should set out plans in next month’s Budget to phase out the furlough scheme as soon as conditions allow, an influential think-tank said on Tuesday, arguing that the UK economy could not adjust to a “new normal” until most emergency support was removed.

The Institute for Fiscal Studies said most support measures should be phased out gradually rather than brought to an abrupt halt. In particular, there was no need to scrap the £20 per week boost to universal credit, since the UK benefits system remained much less generous than those of its peers.

But the economy would not be able to adjust properly while the furlough scheme remained in place — although a more targeted version of the scheme could be needed for sectors such as aviation.

Sunak will use his March 3 Budget to present what he hopes will be the final phase of emergency government support for the economy, which has so far cost more than £250bn. He faces calls from unions and business groups to extend until the end of the year the Job Retention Scheme and other forms of income support that are otherwise set to expire in April.

Observers say the chancellor needs to prevent a sudden surge in job losses in sectors that will take time to recover even after social distancing rules have been relaxed.

Paul Johnson, IFS director, said Sunak should “strike a balance between continuing support for jobs and businesses harmed by lockdowns, and weaning the economy off blanket support which will impede necessary economic adjustment”.

However, the IFS said there was no immediate need for fiscal tightening — even though the public finances were not on a sustainable footing.

The think-tank published analysis, based on scenarios for the economy set out by investment bank Citi, showing that UK borrowing — expected to rise to about £400bn in 2020-21 — could still be running at around £130bn in 2024-25, more than twice the level forecast in last year’s Budget.

This was partly because Citi’s forecasts suggested Covid-19 could weigh on the UK economy — which is highly urbanised and skewed towards social consumption — for longer than elsewhere. But the IFS also said government plans to cut back medium-term spending looked implausible.

Instead, a lasting increase in public spending was likely, given the need to catch up with lost schooling, deal with a huge backlog in non-Covid-19 healthcare and relieve pressures on local authorities.

Under Citi’s central scenario, public sector net debt would be above 100 per cent of national income in 2024-25 and tax rises of £60bn a year could eventually be needed to ensure government revenues covered day-to-day spending, even before accommodating these spending pressures, the IFS said. 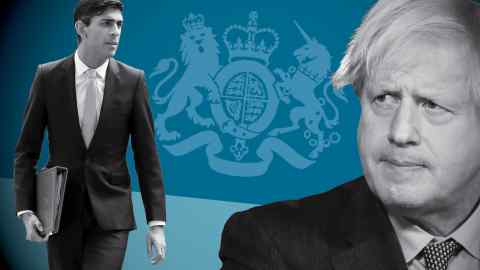 However, immediate tax rises were not needed, it argued — partly because borrowing costs remained low, and partly because of “tremendous uncertainty” around its projections, with a possibility of much lower government borrowing if the recovery proved stronger than expected.

“A reckoning in the form of big future tax rises is highly likely, but not as yet inevitable,” Johnson said.

Instead, the IFS said the priority for the Budget should be on policies to support the economic recovery from the pandemic and address its legacy of greater inequalities — with ultra-loose monetary policy otherwise liable to benefit older, wealthier people to the detriment of the young.

Carl Emmerson, IFS deputy director, said ministers should pursue tax policies that boost growth in the short run, and lead to fiscal consolidation — such as incentives for business investment that could offset a later rise in corporation tax, or an extension of the stamp duty holiday that could lead to longer term reforms to property taxes.