Boris Johnson’s government is shying away from a wholesale scrapping of EU regulations after ministers cancelled a post-Brexit review of workers’ rights in the face of fierce Labour opposition.

The Financial Times reported this month that employee protections enshrined in EU law — including the 48-hour working week — could be torn up under the controversial proposals.

But the idea was condemned by trade unions and Labour and Downing Street confirmed on Thursday: “Any reforms would not come at the expense of the UK’s high standards in areas like workers rights and the environment.”

Rishi Sunak, chancellor, is leading a “better regulation” review but he has made it clear that his focus will be on improving future rules — including those covering new technologies — rather than ripping up old ones.

“This isn’t about lowering standards but about raising our eyes to look at the future — making the most of new sectors, new thinking and new ways of working,” Mr Sunak said this month.

In a sign of the political problems associated with scrapping existing rules — many of them EU regulations written into the UK statute book — ministers initially refused to say whether the review of workers’ rights even existed.

Then they conceded the existence of the review by the Department for Business, Energy and Industrial Strategy (Beis), but insisted that it would not lead to any dilution of workers’ rights.

The proposals ranged from not including overtime pay when calculating some holiday pay entitlements to ending the requirement for businesses to log employees’ working hours. 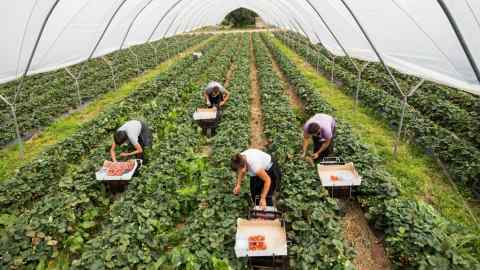 Mr Kwarteng, who replaced Mr Sharma in the business post this month, said he believed Brexit gave the UK an opportunity to have “higher standards” rather than cutting them.

Mr Sunak’s allies insist the better regulation review will lift burdens on business, although it is not expected to conclude in time for his March 3 Budget. EU rules will be considered as part of the review.

Regulatory work already under way includes a review of procurement rules to favour smaller companies, planning reform, a consultation on gene editing and City of London reforms including changes to listing rules to attract growing companies in sectors like digital and fintech.

But business appetite for cutting swaths of existing EU regulation is limited. “I don’t get any sense from the business community that there is a drive to have a race to be Singapore-on-Thames,” Rain Newton-Smith, CBI chief economist said this month.

“There was not much input from business or the public,” one government official said, pointing out that the pandemic had become a bigger priority. Mr Sunak will absorb the exercise into his new review.

Brexiters always claimed there was a thicket of EU red tape that could be removed: Priti Patel, now home secretary, said in 2016 that scrapping EU rules could create 60,000 new jobs.

But in 2018 a CBI survey found that 18 out of 23 sectors favoured complete alignment with EU rules, many of which are now a firmly established part of the British legal framework.

Michael Heseltine, former trade secretary, said he carried out a “red tape challenge” for John Major’s government in the 1990s but “the totality of the exercise was minimal”.

He said: “The reality is the market knows no morality. The thing that changes it from a free-for-all to civilisation is regulation.”

Jason Whittingham: Worcester Raiders takeover has “no conflict” with Morecambe