UK in talks with UAE to back life sciences fund

UK in talks with UAE to back life sciences fund

UK ministers are in talks with a United Arab Emirates sovereign wealth fund to back a new national investment programme worth hundreds of millions of pounds to “turbo charge” the British life sciences industry, according to officials and bankers with knowledge of the situation.

A proposal to launch a new public-private investment fund to back fast-growing businesses in biotech and life sciences is being finalised by Rishi Sunak, the chancellor. It could be announced as early as the Budget on March 3 as the government looks to set out plans for post-pandemic economic growth.

The importance of having national champions in medicines and biotech has also been shown during the pandemic, according to officials, with the UK ahead of other nations in developing, manufacturing and approving vaccines for Covid-19.

The government would commit £200m to the fund, called the Life Sciences Investment Programme. It would then be matched with up to £400m in external financing to either invest in companies directly or through existing biotech funds run by specialist managers.

In what would be an unusual bilateral tie-up for the UK, government officials have been in talks with Mubadala, a $232bn state-owned investment company, said several people close to the process, as they seek Gulf-based sovereign wealth to provide funding. This would allow them to increase the size of the fund substantially, according to banking sources.

One added that the project was being managed by Khaldoon Al Mubarak, chief executive of Mubadala and a point man for handling Abu Dhabi’s relations with the UK.

The talks with the sovereign wealth fund have progressed to an advanced stage, said people familiar with the situation, although they cautioned there was no guarantee that any deal would be agreed. 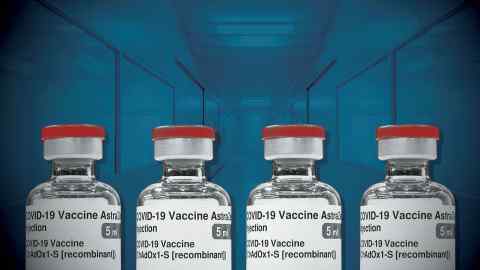 A person close to Mubadala said that such a deal was quite possible, “but just one option, down the road”.

The sovereign wealth money would “turbo charge” the new life sciences strategy, said one person familiar with the talks, but added that the fund was not dependent on securing Middle Eastern cash.

Discussions about the fund have spanned a number of departments, including the Treasury, the business department, the state-backed British Business Bank and the recently formed Office for Investment headed by former City executive Gerry Grimstone.

Officials say the programme details were close to completion but progress had been delayed for months while the Treasury tried to secure sovereign wealth fund investment.

The UAE has made significant investments in the UK, including the London Array offshore wind farm and London Gateway, operated by Dubai’s state-owned ports operator, DP World.

The potential investment into life sciences could help cement a turning point in the bilateral relationship, which had deteriorated in the aftermath of the Arab spring a decade ago, given differing views on how to deal with the rise of political Islam in the Middle East.

Relations hit rock bottom in 2018, when the UAE detained and found British academic Matthew Hedges guilty of spying for the UK government, charges he denied and for which he was pardoned.

Boris Johnson has repeatedly made life sciences a priority in the post-Brexit, post-pandemic economy. In 2019, the prime minister first floated ideas for the fund, saying that it would help companies commercialise medical breakthroughs. Investing in the UK’s already strong position in scientific research was also a priority of Johnson’s then chief adviser Dominic Cummings.

In his first speech as prime minister in 2019, Johnson said that the life sciences sector was one of the UK’s “enormous strengths”. Last November, Johnson held a meeting at Number 10 with Bill Gates and 10 life science companies to discuss future innovation and manufacturing of coronavirus vaccines, treatments and diagnostics.

A Treasury spokesperson said more details would be set out in due course: “We remain committed to providing £200m funding to the Life Sciences Investment Programme, to unlock additional investment in our world-leading life sciences sector.”

Video: Do we need a Netflix for antibiotics?

Simon Cowell ‘sells Beverly Hills home for $14.5M after buying home for $15.5M and remodelling it’