The booking system for the UK government’s flagship Covid-19 hotel quarantine programme crashed within hours of going live on Thursday.

All passengers arriving into England from a list of 33 high-risk “red list” countries must quarantine in a hotel for 10 days from Monday, amid growing concerns among ministers over new variants of coronavirus first identified abroad.

The policy is part of a series of tough new border measures which also include a requirement for all travellers to take two tests for Covid-19 — on days two and eight after arrival — in addition to one they must take 72 hours before departure to the UK.

But the official website offering passengers the chance to book into a government-approved hotel went down on Thursday afternoon and remained unable to take bookings into the evening.

A statement on the website on Thursday afternoon said that “due to a minor technical issue” the booking portal would not be available until later in the day.

It is the latest setback for a scheme that has drawn criticism from within the travel industry and elements of the Conservative party.

The government has had to defend the threat of a 10-year jail sentence for concealing a trip to one of the red list destinations, which covers countries largely across South America and Africa. 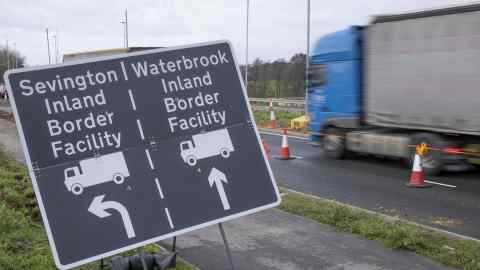 Airports and airlines are also concerned that ministers are still trying to work out how to implement the quarantine scheme, with less than four days until the first passengers who will have to quarantine land in the UK.

The industry had been told that the system would be rolled out across 10 airports, but the government on Thursday said only five would be used initially: Heathrow, Gatwick, London City, Birmingham and Farnborough in Hampshire, a luxury facility which caters for private jets.

Direct flights to the red list countries are banned, meaning passengers will be mixed in with people arriving from other parts of the world on planes and on the ground.

The government also unveiled a new range of tough sanctions for breaking the rules: anyone who has not pre-booked their quarantine accommodation via the government’s website will be fined up to £4,000 and still have to pay the hotel charges, while arriving at an airport other than the five designated sites will lead to a fine of up to £10,000.

Foreign diplomats, and some UK government officials, contractors and hauliers are exempt from the rules.

The current policy only applies to England, although the Welsh and Northern Irish devolved administrations are expected to implement similar rules.

The Scottish government has indicated it will go further and require
all people arriving from any country outside the UK’s common travel area with Ireland to go into the new hotel quarantine system.

The health department did not initially respond to a request for comment.

Gavin Whyte backed to get ‘fans off their sofas’ at Hull