The travel industry has criticised the UK government after ministers warned it was too soon for Britons to book holidays at home or abroad.

Grant Shapps, transport secretary, said on Wednesday that people should not book holidays internationally or domestically until there was a clearer plan for exiting lockdown, due to be announced by prime minister Boris Johnson later in February.

Britons should “do nothing at this stage,” he said, adding that under current lockdown restricitons, anyone in the UK is currently banned from leaving the country for a holiday.

Michael O’Leary, the chief executive of Ryanair, accused ministers of “posturing” and said there is “almost a hysteria” about stopping people from travelling, particularly given the early success of the UK’s vaccination programme.

The airline boss said the UK would never be able to seal itself off from the world to stop new variants of Covid-19 entering the country, and that travel should be opened up as soon as vulnerable people have been vaccinated.

“I think there is going to be an unanswerable case to allow people to move freely again,” he said. “What’s the point of a successful vaccination programme if you aren’t going to use it to lift restrictions?”

Glyn Jones, chief executive of London Southend Airport, said Shapps’ comments were “the last thing we need” and that the summer season is “at serious risk”.

One executive from a major UK holiday provider said: “We don’t see — unless something goes wrong — how the government can reasonably stop travel in a nation that’s mostly vaccinated by May.”

The warnings over domestic and international travel come days after holiday companies in the UK reported surging bookings for staycations.

Last month health secretary Matt Hancock said he expected a “great British summer” and that he would be holidaying in Cornwall.

From Monday the government is preparing to roll out tough new measures for travellers arriving into England in an effort to thwart the spread of new variants of Covid-19.

Arrivals from 33 “red list” countries will have to quarantine in a hotel for 10 days, while all travellers will be required to take two tests — on day two and day eight — in addition to one they must take 72 hours before departure.

The travel and tourism industry said the latest measures could be ruinous for the summer holiday season and has called for a road map out of the increasingly strict restrictions.

“Losing one summer was very awkward, losing two summers would be a disaster,” Jones said.

Shapps defended the new travel restrictions, which include the threat of a 10-year jail sentence for concealing a trip to one of the red list destinations, telling the BBC that introducing a new variant of Covid-19 could result in “impacting on a lot of people’s lives or indeed losing a lot of people’s lives”.

He said that a lengthy prison sentence would only occur for those who “deliberately went out of their way to mislead and lie” about their travel and avoid the rules. 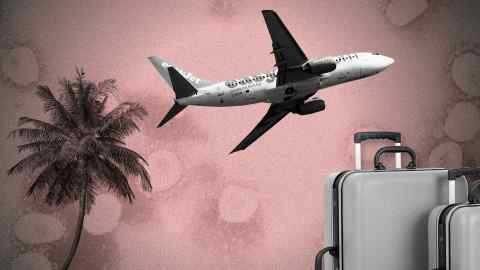 The potential 10-year jail sentence was sharply criticised by two former Conservative attorneys-general — Dominic Grieve and Sir Geoffrey Cox, who questioned whether the punishment was proportionate.

Charles Walker, a senior Conservative MP, said that health secretary Matt Hancock’s announcement on the jail terms was “a really stupid thing to say”, adding that it “demeans his office and position around the cabinet table”.

Airlines and airports are privately concerned that they are still waiting to hear details on how they should deal with people arriving from high-risk countries, according to two people familiar with the discussions.

Airports have told the government they do not have enough staff to marshal passengers through terminals, and have instead suggested Border Force staff be used. Thousands of staff have been sacked or furloughed following the collapse in passengers caused by the Covid-19 pandemic.

There is also concern within the industry that five days from the quarantine system going live there is no directive on whether to segregate passengers from red list countries, either on planes or at the airports. Direct flights from the high-risk countries are banned, meaning passengers will have to mix with people arriving from other countries.

Full details are available on the government’s official website.

Job vacancies rising, but some areas have struggled to weather the storm

Scots reveal concerns about mental health of others this Christmas