It may only be round two of the 2021 Six Nations but Ireland have declared Sunday’s match with unbeaten France as a “must win” for their title ambitions.

Ireland lost narrowly in Wales last weekend despite playing with 14 men for 66 minutes and discipline will be crucial if they are to topple the tournament favourites.

France are on an upward curve under head coach Fabien Galthie and will aim to cement their own championship credentials by winning in Dublin for the first time since 2011.

Ireland head coach Andy Farrell has made four enforced changes from the side that lost in Cardiff last weekend.

Captain Johnny Sexton and second row James Ryan have failed to recover from concussion, scrum-half Conor Murray has been ruled out with a hamstring injury and flanker Peter O’Mahony is suspended.

France have made two changes to the side that hammered Italy.

Clermont wing Damien Penaud replaces Teddy Thomas and Castres’ Anthony Jelonch comes in for Dylan Cretin in at blindside flanker, with Thomas and Cretin dropping to the bench.

Eddie Butler: France have tweaked their team, bringing in Penaud to deal with Ireland’s aerial threat to the wings, and Jelonch to add toughness to the back-row.

As for the home team, their future is suddenly their present – no Sexton and no Murray. Gibson-Park and Burns still fit an Irish template that works: kick high to get close to the line and then let the forwards rumble. France have selected accordingly.

Similarly, Rhys Ruddock and Gibson-Park may be briefed to deal with a specific threat – a pair chosen to keep Antoine Dupont in check. All very intriguing. Ireland 24 France 25

View from both camps

Ireland head coach Andy Farrell: “Every Test week always presents its own challenges. There has been a lot going on this week but we’re a squad and we’ve been a squad since we met up. Everyone has been swapping in and out.

“You always have at the back of your mind the ‘what if’ scenarios and here we are. We will give it our best shot, there is no doubt about that.”

France head coach Fabien Galthie: “Penaud fits the profile of the type of player which will allow us to be present in a sector of the game we imagine the Irish will rely on a lot, going down the blindside and also putting the ball up in the air.”

“He, to me, appears prepared for this type of battle.” 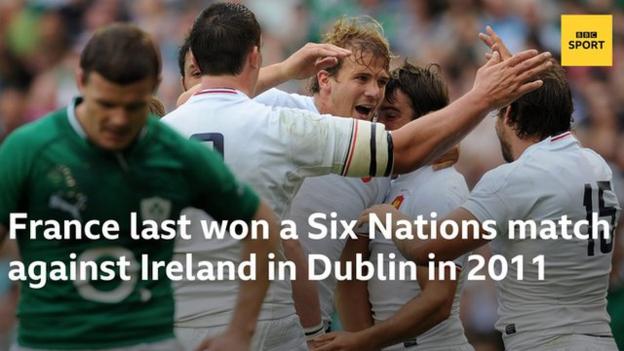