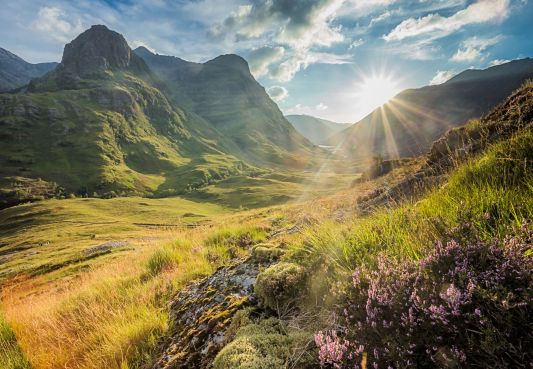 Scotland is known the world over for its food and drink. The country itself is synonymous with its landscape: lush, green vistas dotted with sheep and Highland cows, seaside distilleries and peaceful lochs. Scotland’s rich landscape lends itself to the artisan food scene that has blossomed over the years into a thriving industry – one that is both intensely focused on local provenance, while also being part of an important international market.

But like other food and drink sectors all around the world, Scotland’s flourishing producers and retailers have taken a hit from the Covid-19 pandemic. The challenges that the crisis has brought – shuttered shops, strained finances, scuppered supply chains and an ever-changing list of government guidelines, to name a few – have certainly been a cause for concern, but there have been positive takeaways, too.

“Despite considerable consumer anxiety, we have seen huge demand for quality local food during the pandemic,” says Will Docker at Balgove Larder, a farm shop located just outside of St Andrews. “The quality of Scottish produce is one of the only constants that we’ve seen this year, and it will always stand out as being world class.”

With the desire for good, local food running high, can Scotland’s food and drink industry revive its fortunes?

In 2018, Scotland Food & Drink released its vision for the future: Ambition 2030. Under the plan, the group aims to make food and drink Scotland’s most valuable industry by doubling turnover to reach £30bn by 2030.

Thanks to Covid-19, these plans have been set back by about two years, according to CEO James Withers. However, he and many of Scotland’s food and drink industry players remain optimistic.

Scotland’s dairy farmers, for instance, were the least impacted by Covid-19 in the UK, according to a survey by the Agriculture and Horticulture Development Board (AHDB) in May 2020. While over half of respondents had seen some impact on their farming business as a result of Covid-19, just under 5% had seen a “high” impact, considerably lower than the national average of 21%.

Elsewhere, the sector has stayed active through online programmes and events. Bowhouse, a Fife-based group that aims to connect Scotland’s small growers and producers with restaurants and shoppers, took advantage of online opportunities in 2020 by launching an online market, Bowhouse Link.

“It’s been an extremely challenging year, but many food and drink businesses have shown huge resilience and have been able to strengthen their relationship with their customers,” said Rosie Jack, manager at Bowhouse.

The service, which offers independent producers a way to supply local people directly, has seen a strong uptake, Rosie said. “People are interested in buying local food and drink because of the quality of the produce, but also because it helps support a circular local economy.”

Retailers have also recognised that shoppers are increasingly keen to enjoy Scotland’s local bounty of food. Like many farm shops, Balgove boosted its online business over 2020 in order to continue serving customers during the pandemic. By staying agile, Balgove has been able to stay one step ahead of Covid. For instance, the shop was able to step in when supermarket supply chains failed. This has led to a “huge response” from locals, Will said.

“It has been a tough time, but we have felt very much appreciated by our customers, who are looking for top quality local produce more than ever before,” he added.

Demand for Scotland’s revered food and beverages comes not only from within the country’s borders, but also from export markets, which make up a significant chunk of the UK economy.

Scottish food exports have more than doubled over the past 10 years, and the industry is now worth £15bn, according to Scotland Food & Drink. Indeed, Scottish salmon and whisky are among the UK’s most valuable exports, with 42 bottles of whisky shipped overseas every second, the Scotch Whisky Association (SWA) says.

But in the first half of 2020, the UK’s exports fell for the first time since 2015 due to Covid-19. Data from the Food and Drink Federation shows that exports of whisky were down by more than 30%, while salmon exports were 23% lower than the same period in 2019.

Scotland’s most famous export, Scotch whisky, has faced an additional challenge in recent years in the form of a 25% tariff from the US – its most valuable export market. The tariff was put in place after the US and EU engaged in a tit-for-tat trade war, and according to the SWA whisky exports have lost more than £200m since it has been in place.

Currently, there are 133 whisky distilleries in operation across Scotland, and small producers in particular are at risk if the tariff is not removed. But the UK has an opportunity to negotiate new terms as part of ongoing trade talks with the US, now that it has left the EU.

The UK’s departure from the EU is yet another thorn in the side of Scottish exports. Two-thirds of the country’s products are shipped to the EU, according to Scotland Food & Drink, and the group says maintaining relationships with Europe will be key going forwards, alongside quickly developing export opportunities elsewhere.

But the group remains optimistic and has created a Recovery Plan programme with the Scottish Government for its farming, fishing, food and drink sector. “The underlying strength of Scotland’s brand remains,” Scotland Food & Drink writes in the Recovery Plan.

So what’s next for ‘Brand Scotland’? One area that neither Covid-19 nor Brexit can change is the land itself. “We have great quality land, and a huge importance is placed on animal welfare, which shows in our food,” says Rory Mellis, director of artisan Scottish cheesemonger IJ Mellis.

While Scotland has always been known as the home of whisky, Rory says that’s changing – the food and drink scene is widening. “We are beginning to be more widely recognised for the cheese, fish and meat we produce,” he said. “Scotland is so diverse. From beautiful salmon off our coasts to venison from our highlands, there is so much on offer.”

Take cheese, for instance. “It’s often said our unique climate and geography is why Scotland is a great place for cheese makers and cheesemongers. We have a fantastic variety of cheese styles for a small place, and I don’t know many people who live here who don’t enjoy a good cheese board,” he said. From rich and buttery St Andrews Farmhouse Cheddar to punchy Isle of Mull Farmhouse cheese, there are many native varieties on offer.

“Everything, including Scottish farmhouse cheese, is produced with care, and I think those who are local or those just visiting can see the passion, dedication and love poured into the making of Scottish produce,” Rory added.

“People want to feel a connection”

Demand is also rising for local meat and produce, says Will of Balgove. “We produce meat from our own farms and grow much of our own salads and vegetables – but demand has been amazing, and our single-link supply chains have held up brilliantly. This is a real testament to the benefits of localism,” he says.

Will credits the revival of local produce to Covid-19’s impact on individual lives, which has seen consumers swapping restaurant outings for home-cooked meals. “This year, huge swathes of the nation have actually had time, something that is usually so scarce, and they have used it wisely doing things they love.

“We’ve seen customers choosing their ingredients with such delight and excitement: be it for a slow cooked joint, trying a new cut on the barbecue or competing in a bake off,” Will explains. “The story of where the ingredients have come from is so important in any dish; local sourcing really is the sixth sensation.”

Rory agrees that shopping habits have changed. “Quality and sustainability are more at the forefront than ever, which is great news for artisan cheese makers and other small business owners,” he says.

“People want to feel a connection to what they’re eating and drinking, and I think artisan produce can tell that story,” Rory adds.

Rosie, too, sees that more consumers are now curious about the story behind the food they eat, which plays to the natural strengths of Scottish food and drink. “We’ve noticed a desire to seek out delicious and interesting produce, with a stronger interest in a product’s backstory. Food and drink is always a necessity, but people are more aware than ever before what a pleasure it is, too.”

Scotland’s food and drink industry has plenty of storytelling to offer, and small producers in particular play an outsized role. “Small producers bring innovation and quality of produce, but they also provide a story: their first hand experience and passion,” Rosie says. “This story captures people’s attention because people want more than just something that tastes good. They want to hear how something was made, the story behind the product and everything that comes with it.”

With a greater appreciation growing both locally and abroad for Scotland’s rich, natural larder, local food and drink producers and retailers are proving their resilience.

Get Speciality Food magazine delivered to your inbox FREE


Get your free copy

Don’t risk your health to see Tenet, which is uber-fun but still just a movie