Premier League: A look back at other unpredictable title races

Premier League: A look back at other unpredictable title races

“Four or five teams could win the Premier League – it is wide open and shaping up to be a thrilling title race.”

Ex-England captain Alan Shearer knows about winning the Premier League title after his goals fired Blackburn to glory in 1994-95 and in a recent column for BBC Sport he was excited about what the rest of the season has to bring.

And with only nine points separating the top seven the next few months are going to see a thrilling conclusion to the 2020-21 campaign. 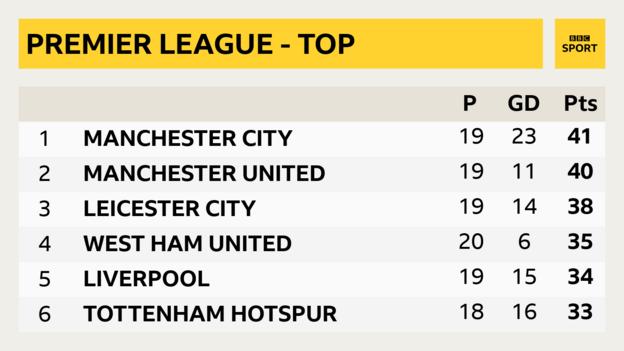 Some seasons you get one team that runs away with it, like last season when Liverpool finished 18 points clear, and some years you get a good head-to-head battle between two clubs.

But how often do you get to the halfway point of a season with a large number of clubs holding genuine title aspirations?

We have taken a look through the stats to see what happened in those Premier League campaigns when you just could not predict a winner – at the bottom of the page you can vote on who you think will win it this season. 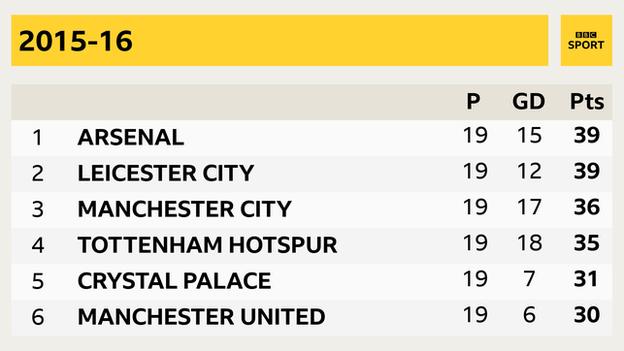 How it stood: What a season it was five years ago with the top of the table seeing Leicester and Crystal Palace surprisingly near the top after 19 matches. Defending champions Chelsea struggled and dismissed Jose Mourinho – for a second time – in December. Arsenal, aiming for their first Premier League title since 2004, led the way at the halfway point, ahead of the Foxes on goal difference. Manchester City had won the league in two of the previous four years and were in with a shout again.

What happened? Leicester, who started the season rated at 5,000-1 to win the league, became the champions in the biggest shock in Premier League history. They did it in style too, finishing 10 points ahead of Arsenal and 11 clear of Tottenham in third. Manchester City were fourth, Manchester United fifth, but Palace only picked up another 11 points from their last 19 matches to tumble all the way down to 15th. 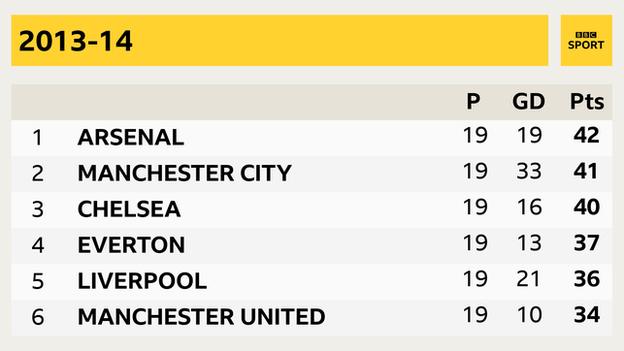 How it stood: Arsenal spent a large part of 2013-14 on top and were there after 19 of 38 games. Manuel Pellegrini’s Manchester City were a point behind and Chelsea, with Jose Mourinho back in charge for a second spell, were only two points off the top.

What happened? Liverpool looked on course for the title as they led late on, but a home loss to Chelsea followed by a 3-3 draw away at Crystal Palace, where they threw away a 3-0 lead, opened the door for Manchester City to become champions in Pellegrini’s first season in English football.

A 2-0 win over West Ham on the final day gave City the title with 86 points, two ahead of Liverpool and four in front of Chelsea. A disappointing second half to the season dropped Arsenal to fourth, Everton were fifth with Manchester United in seventh. 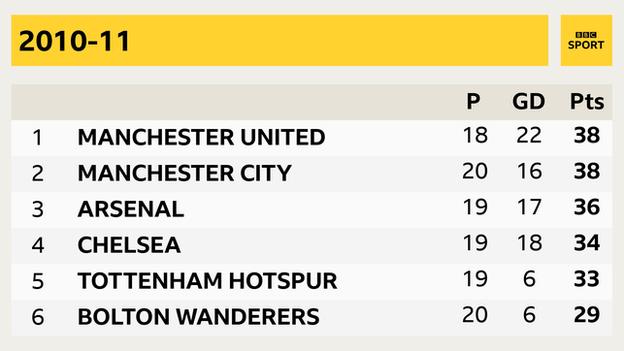 How it stood: Ten years ago it was all set up to be a brilliant title race with both Manchester clubs on 38 points and London trio Arsenal, Chelsea and Tottenham all in contention too. These were good times for Bolton too as they were sixth – now they are in League Two.

What happened? United ran away with it for Premier League title – and Sir Alex Ferguson’s – number 12, ending the season nine points clear of both Chelsea and Manchester City. Arsenal and Tottenham were fourth and fifth respectively, but Bolton fell away badly, ending down in 14th. 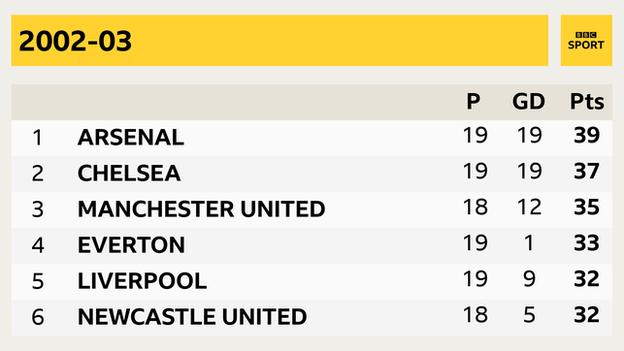 How it stood: Arsene Wenger’s Arsenal, title winners in the previous season, made a great start to their defence as they led the way halfway through the campaign. But there were only seven points separating the top six, with Chelsea, Manchester United, Everton, Liverpool and Newcastle in contention.

What happened? Manchester United won the Premier League for the eighth time in 11 years as they finished five points clear of the Gunners. Then came Newcastle in third, Chelsea in fourth, Liverpool in fifth with Everton in seventh. 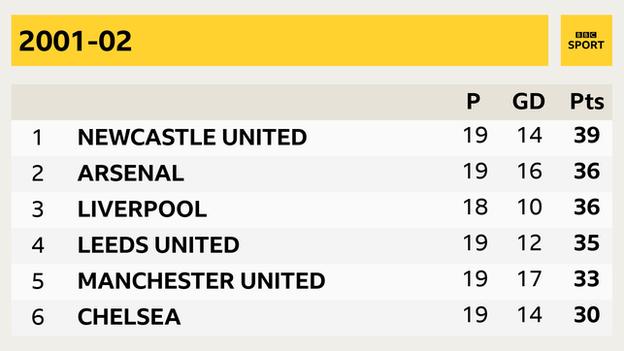 How it stood: Newcastle, led by the goalscoring prowess of Shearer, were beginning to dream of becoming English champions for the first time in 75 years. This was a season with some great strikers in brilliant form, with Thierry Henry for Arsenal, Michael Owen for Liverpool, Ruud van Nistelrooy for Manchester United and Jimmy Floyd Hasselbaink for Chelsea.

What happened? A Sylvain Wiltord goal for Arsenal in a 1-0 victory at Old Trafford saw the Gunners win the league with a game to spare. Liverpool ended up second, with Manchester United third, Newcastle fourth, Leeds fifth and Chelsea sixth as the top six at the halfway point all finished in the top six at the end, albeit in a different order. 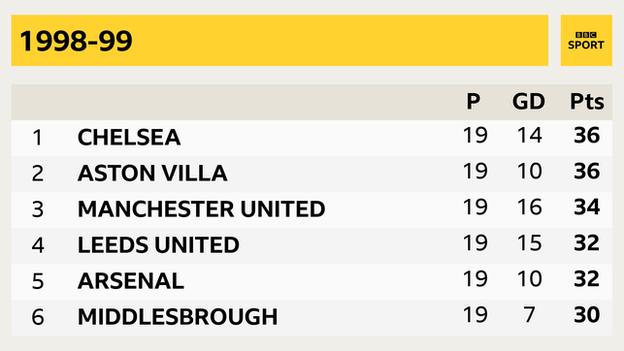 How it stood: The 1998-99 Premier League season was one of the best. At the halfway point only six points separated the top six, with Chelsea, who had Gianluca Vialli as their player-manager, leading the way with only goal difference separating them and second-placed Aston Villa. Arsenal were the reigning champions and were nicely placed, as were Manchester United.

What happened? It went all the way down to the final day of the season. Manchester United came back from 1-0 down to beat Tottenham 2-1 to clinch the title in dramatic fashion, to deny Arsenal back-to-back titles as the Gunners finished one point behind Sir Alex Ferguson’s side.

Chelsea were three points further back in third, Leeds stayed fourth, Aston Villa fell to sixth and Middlesbrough dropped to ninth. This was the start of a special period for Manchester United as after clinching the Premier League, they then won both the FA Cup and Champions League, with a certain Ole Gunnar Solskjaer scoring the winner to become European champions. 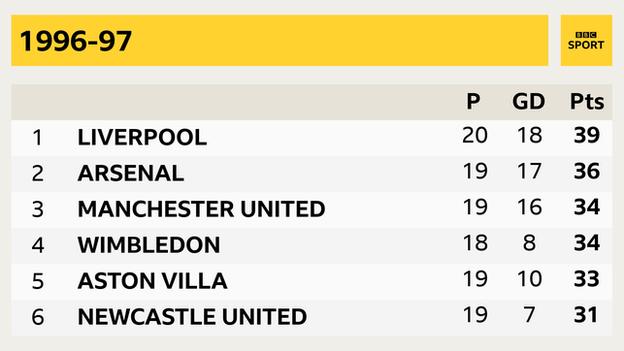 How it stood: Roy Evans’ Liverpool, boosted by the goals of Robbie Fowler, sat top at the halfway point in 1996-97, although Arsenal had a game in hand in second and Wimbledon were dreaming big as they sat fourth, five points off the top with two games in hand. With Shearer and Les Ferdinand banging in the goals for Newcastle, they were hopeful as well.

What happened? Manchester United, for the fourth time in five seasons, became English champions and their winning points total of 75 is the lowest for a Premier League winner. However, it was still seven more than Newcastle managed to end with in second, followed by Arsenal in third, Liverpool fourth, Aston Villa fifth, with Wimbledon coming eighth. 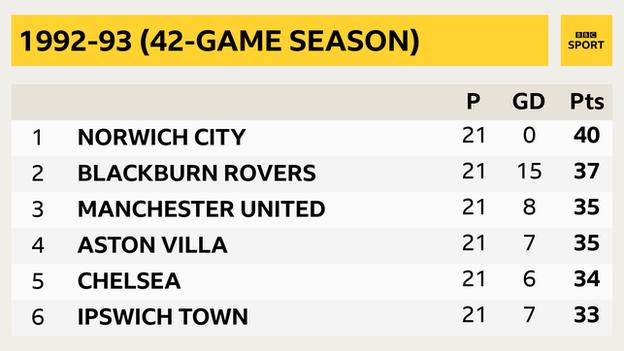 How it stood: The first season of the newly-formed Premier League was a thrilling one. These were great days for football in East Anglia with Norwich City – despite conceding 34 goals in their first 21 matches and possessing a goal difference of zero – sitting top with rivals Ipswich Town in sixth.

Blackburn in second had already thrashed the Canaries 7-1, while Manchester United were aiming to become English champions for the first time since 1966-67.

What happened? Norwich’s defensive problems proved to be their downfall as they came third, with Aston Villa second. But there was no stopping Ferguson’s Manchester United as they finished 10 points clear at the top for the first of their 13 Premier League titles.

Blackburn ended fourth, while Chelsea dropped to 11th and Ipswich plummeted even further, down to 16th, only avoiding relegation by three points.

If you are viewing this page on the BBC News app please click here to vote.