Pippa Middleton cut a stylish figure as she stepped out in West London to get some fresh air on Friday, following reports she’s pregnant with her second child by husband James Matthews.

Kate Middleton‘s younger sister, 37, was spotted strolling around Chelsea wrapped up warm in a comfortable military green parka as she enjoyed the last rays of sunshine before the icy weekend.

Sharing smiles with passers-by and looking relaxed, it was the third time Pippa was spotted out since reports she’s ‘pregnant with her second child.’

For her the outing, Pippa opted for a green parka with a faux fur collar from Fay from last season, which she wore with mom jeans and an immaculate pair of white Jimmy Choo trainers. 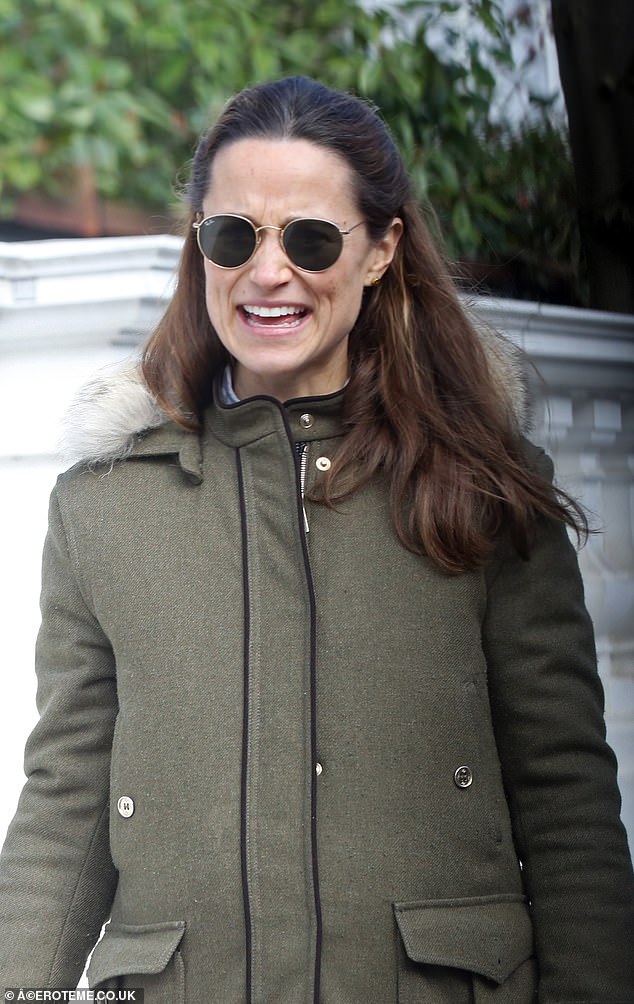 Pippa Middleton (pictured), 37, was spotted having a stroll around Chelsea, West London, on Friday following reports she’s pregnant with her second child 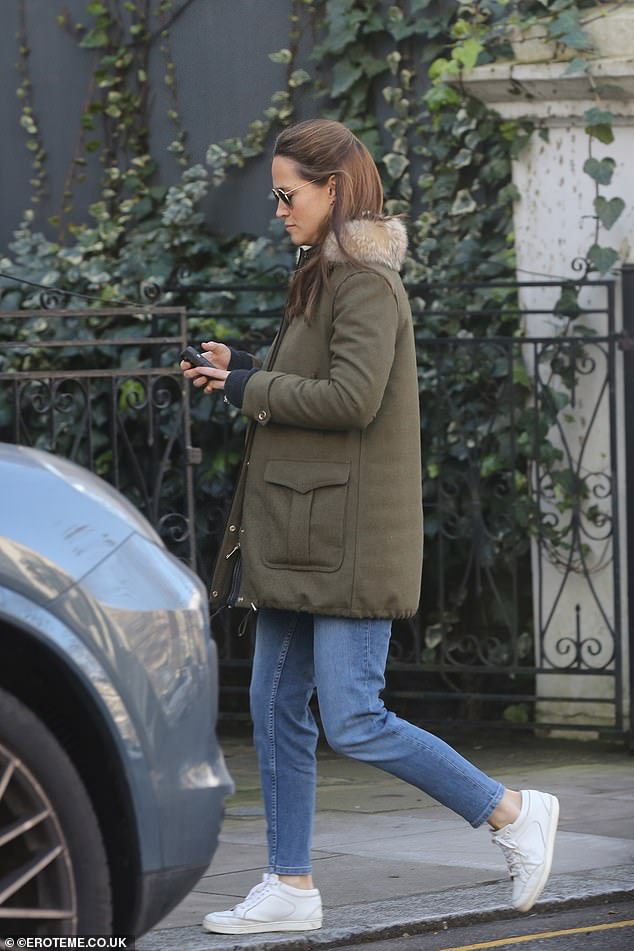 Her long brunette hair, which bounced on her shoulder as she walked down the street, was clipped back by a pin at the back of her head.

Rather than a bag, Pippa was seen holding a pair of sunglasses in her hand instead.

The Duchess of Cambridge’s sister rubbed the glasses to clear the lenses before putting them back on and crossing the road to continue her walk.

It was reported in December that Pippa, who is already the mother of Arthur, two, may be expecting a second child.

A source close to the Middleton family told Page Six: ‘Pippa and James are thrilled, it’s fantastic news amid a difficult year. The entire family is delighted’. 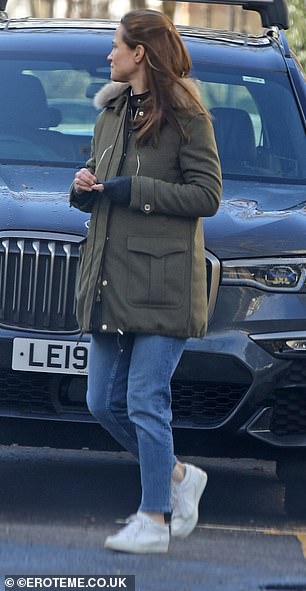 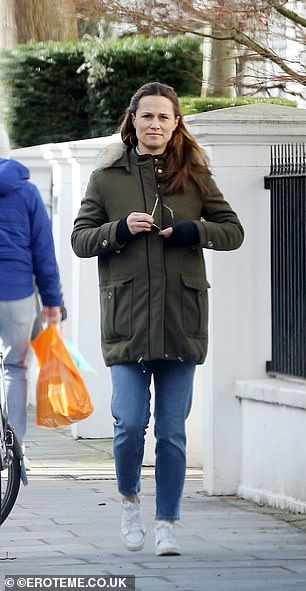 The Duchess of Cambridge’s sister (pictured, left and right), who donned a stylish pair of shades, cut a relaxed figure for the outing

As well as a trio of royal cousins from their aunt Kate, the new Middleton-Matthews baby will also have cousins on their father’s side.

The Matthews family owns the Eden Rock resort on St Barts, one of the region’s most exclusive hotels beloved by many famous faces.

Pippa and James tied the knot in 2017 at St. Mark’s Church in Englefield, the estate of former Conservative MP Richard Benyon. 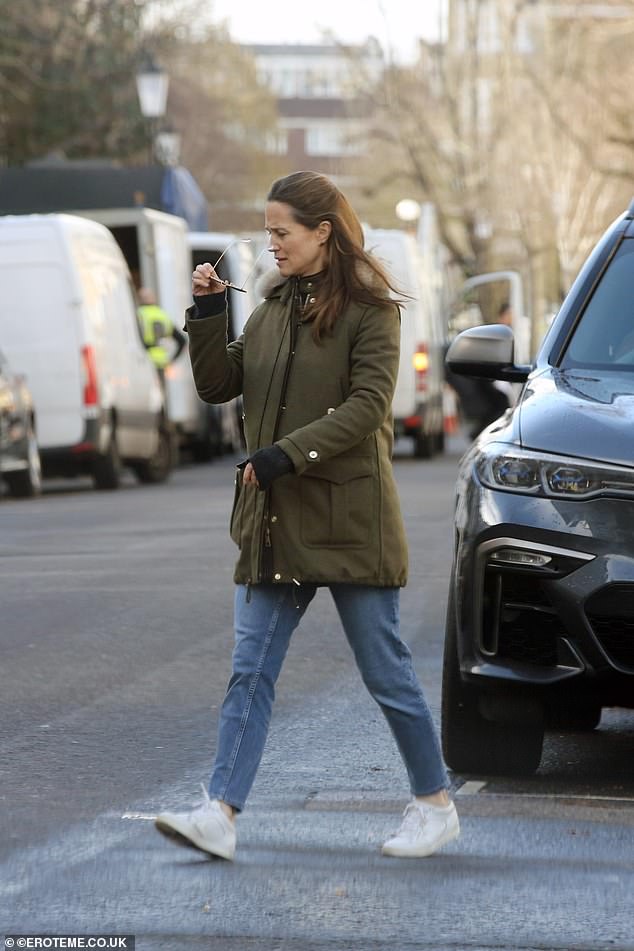 Pippa made sure her glasses were clean before putting them off, moments before crossing the street 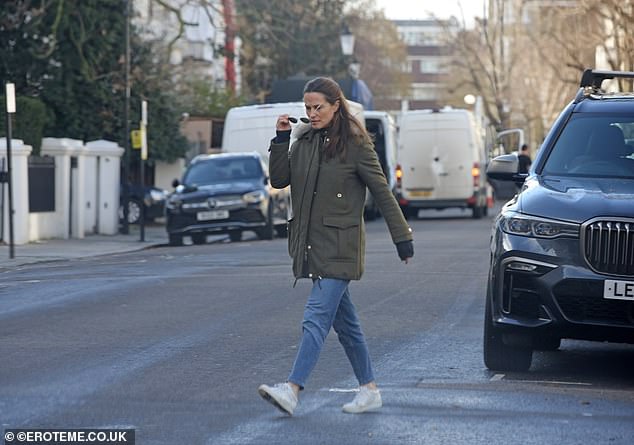 Taking a brisk walk during the coronavirus lockdown, Pippa looked like any other Londoner as she stepped out for a Winter walk

Pippa, who is reportedly expecting her second child with her husband James, opted for a casual look (pictured, left and right)

In 2018, Pippa welcomed baby Arthur in the Lindo Wing of St. Mary’s Hospital, the same place where sister Kate gave birth to all three of her children.

The socialite and columnist documented how she stayed active during her first pregnancy for Waitrose Weekend magazine revealing that little Arthur follows in the active family’s footsteps.

‘Now that Arthur is 11 months old and more mobile, I have been trying to come up with different activities to do with him,’ she wrote in September 2019.

‘I needed to find something more than just park walks in the pram. Our local baby gym has been a saving grace. It’s a big space full of fun, soft objects, playmats, stairs, balls, swings, mini trampolines and more to stimulate and physically engage babies and toddlers,’ she added.

Smiling as she crossed passersby, left, Pippa could be seen cleaning the lenses of her sunglasses before putting them on (pictured, left and right)

FTSE 100 eases back from highs after weak US jobs report