Penarth sees highest rise in cases in the Cardiff and Vale

Penarth sees highest rise in cases in the Cardiff and Vale

PENARTH saw the highest rise in cases in the Cardiff and Vale University Health Board region and the second highest figure in Wales in recent days.

In the seven days up to February 5 Penarth recorded 36 new cases – up from 12 on the previous week and by far the highest number in Cardiff and the Vale of Glamorgan.

If not for 42 cases in Holywell and Bagillt in the north of the country, Penarth would have recorded the highest number of Covid cases in Wales for that week.

It came as Vale police officers pleaded with people not to travel to the seafront for the third week in succession.

But Cardiff and Vale’s track and trace service has not attributed the rise to people visiting the area.

A spokesman for the Cardiff and Vale Test, Trace, Protect service said: “We are continuing to see cases and incidents in care homes and other closed settings across the Vale. As the number of cases of COVID-19 in the community declines, individual incidents can have a significant impact on case rates. As the vaccination programme continues in the Vale, we expect to see the number of such incidents fall.” 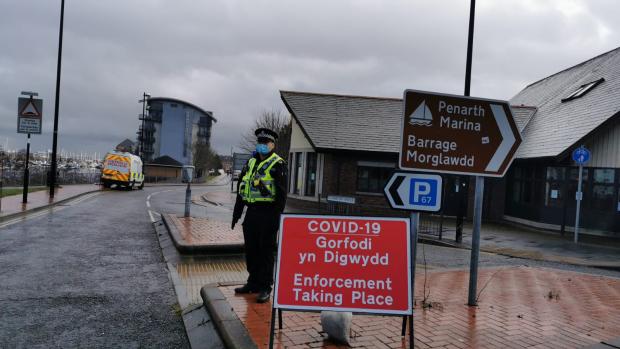 Police in Penarth on February 5

It pushed the rolling case rate in the Vale for that week further above Cardiff, with the whole of the Vale recording a case rate of 113, and Cardiff recording 98.7.

Over the weekend police were again at the marina and the esplanade stopping cars from parking amid concerns over rising transmission rates, as they have been for the last three weeks.

Last month the situation got so bad that police closed off the esplanade to vehicles.

Wales is under tier four restrictions, meaning nobody without a legitimate reason should be travelling by vehicle to exercise, and nobody should be socialising face to face with anyone outside of their household bubble.

Overall the picture is still improving in the Vale. In the seven days up to February 7 the Vale recorded 136 new cases – less than 150 the previous week and 219 the week before.

So far this week the Vale has recorded 41 new cases – 20 on Monday, 11 on Tuesday, and ten on Wednesday.

When is the lockdown review? Date Covid rules are being reviewed, and when restrictions could end