Ofcom has today broadly praised the progress that Openreach have made in their on-going efforts to become a distinct “legally separate” company away from BT, although not all stakeholders agree with the UK telecoms regulator and “growing pains” have also been noted with their Physical Infrastructure Access (PIA) product.

The original 2016 Strategic Review of Digital Communications (full summary) found that Openreach still had an “incentive to make decisions in the interests of BT, rather than BT’s competitors, which can lead to competition problems” and that the BT had failed to “sufficiently” consult rival ISPs, such as those that piggyback off their network, on future “investment plans that affect them.” They were also deemed to have under-invested in their network to the tune of “hundreds of millions of pounds.”

Since then Openreach have implemented many of the require changes and this year committed to invest £12bn in order to extend their gigabit-capable Fibre-to-the-Premises (FTTP) based broadband network to cover 4.5 million premises by March 2021 (currently available to 3.5 million), followed by 20 million premises in the “mid – to late-2020s” (here) – at an “average build cost of £300 – £400 per premises.” 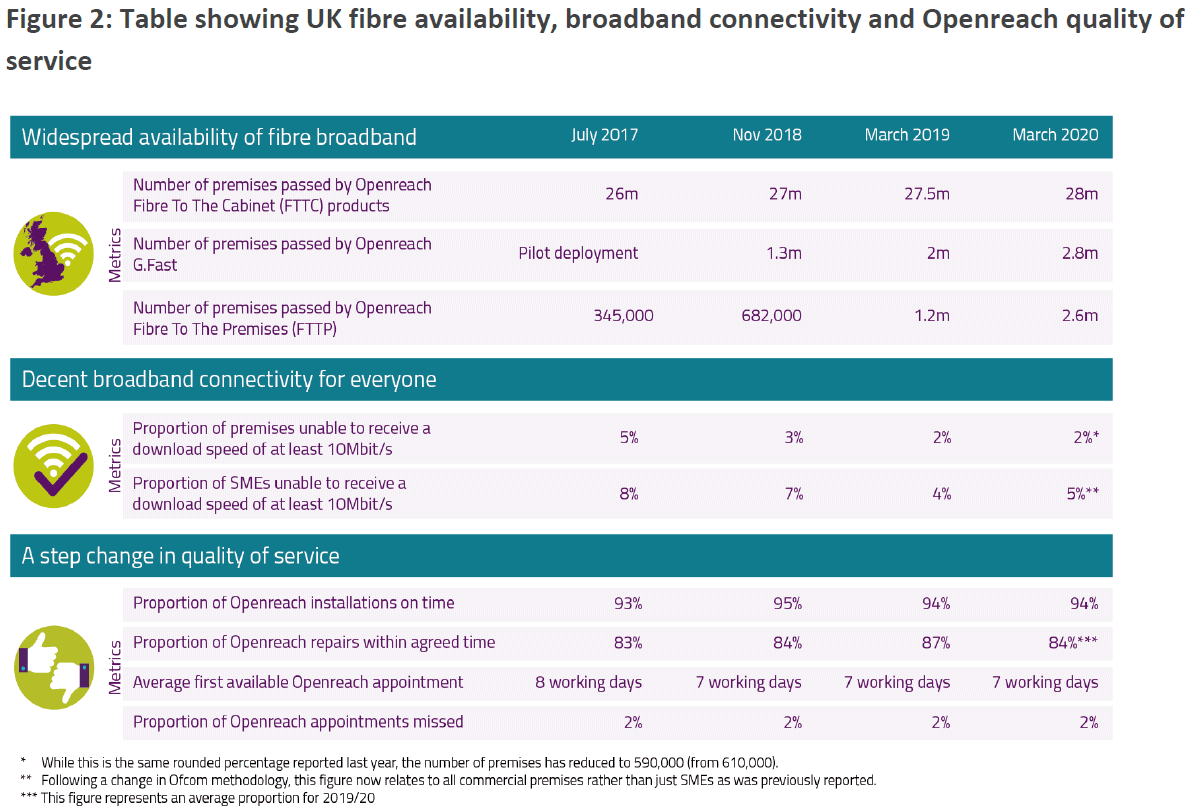 Ofcom, which is required to monitor BT’s implementation progress on this agreement via their Openreach Monitoring Unit (OMU), has today published their latest annual report. Overall, the regulator was broadly very positive on the efforts that Openreach have made so far, although there’s some room for improvement around access to their existing cable ducts and poles.

Overall, BT and Openreach continue to make good progress in strengthening and safeguarding Openreach’s strategic independence. However, there is no room for complacency and continued focus and vigilance will be needed to ensure progress continues, is fully embedded and sustainable.

…
However, some feedback indicates that not all stakeholders think the separation between BT and Openreach is working as they consider it should. For example, some industry stakeholders have continued to raise their concerns about the potential for undue BT Group influence over Openreach pricing decisions. We also note some concerns around coincidences of timing of Openreach fibre deployment in certain locations where communication providers’3 (‘providers’) build footprints overlap. While these have been raised as concerns, we have to date not found anything that would suggest that Openreach is not acting in accordance with the Commitments. These will continue to be particular areas of focus for our monitoring in the year ahead.

Use of BT’s duct and poles by other providers to deliver their networks has increased substantially since our last report. We welcome Openreach’s work with providers on this and the progress made. This is a complex challenge and we note Openreach commitment to making physical infrastructure access (‘PIA’) work.

However, there have been ‘growing pains’ in the implementation of PIA, and we believe Openreach will need to do more to ensure providers can gain access at the scale and pace necessary to support the deployment of multiple, fast fibre networks for UK consumers. Openreach continues to engage with its PIA customers and provides updates at a regular roundtable meetings of industry CEOs, chaired by Ofcom.

A number of major rivals, such as Cityfibre, have often raised concerns about Openreach’s overbuild of their full fibre networks, which the regulator has today largely dismissed. Part of the reason for that is because they expect overbuild to occur in commercially competitive urban areas, which is where many of the recent gripes have come from. Both the Government and Ofcom agree that dense urban areas can sustain several FTTP rivals.

As for PIA, Ofcom notes that there has been considerable interest in this, with more than 90 providers to-date having registered with Openreach as PIA customers, and approximately half of those currently building PIA-based full-fibre networks. Orders continue to increase, despite Covid-19, with order volumes over the past 12 months covering over 12,000km of duct and over 50,000 poles. Nevertheless, the regulator’s report does highlight a few concerns around this.

Summary of PIA Concerns by Operators

* Some network providers have felt that progress on certain issues – for example process improvements and addressing inventory records issues – has been slower than they might have expected.

* Some network providers do not always feel that they are receiving fair and equal treatment, particularly, in relation to using Openreach’s ducts without a time, cost or complexity disadvantage compared to Openreach itself. Ofcom has been working with Openreach and industry to agree the priorities for further attention and action to address these operational issues around implementation.

* Some concerns have been raised with Ofcom and the OMU about how Openreach uses the data provided to it under the PIA process. While the complaints do not indicate any wrongdoing on the part of Openreach they show that further work is required to ensure confidence amongst network providers.

The good news is that those remaining issues should be much easier to resolve than the ones that Openreach has already overcome to reach this point.

“We’re encouraged that Ofcom recognise the progress Openreach is making as a business and, in particular, how our amazing engineers have responded to the Coronavirus pandemic. Openreach exists to promote choice and competition in the UK’s broadband market, and we’re continuing to focus on building a better, broader and faster network for our customers all over the country. There’s a big job to do, and no room for complacency, so we’ll be working closely with our customers, Ofcom, the wider industry and all of our stakeholders to keep the UK connected.”

The report also picked up on a few issues around Openreach’s minimum service level requirements but, given the impact of COVID-19 this year, this area has been allowed a little more flexibility.