Scotland’s health service has awarded a contract worth more than £2 million to Big Four professional services firm KPMG for “management and advisory services” on the nation’s coronavirus vaccine programme. The news has raised more than a few eyebrows, with the Scottish Government coming under scrutiny for farming out work to private enterprises which critics believe should be performed by civil servants or the NHS.

According to reports in the Scottish press, three months before the first vaccinations began in Scotland, a contract for “extended flu and Covid vaccination programme management and advisory services”  and was handed out to KPMG. The deal, worth a total of £2.32 million, was given to the advisory and accounting firm without any other competing bids in September, with the Government citing the “extreme urgency” of the vaccination programme.

A contract award notice published at the start of 2021 added that the Government’s justification for directly awarding the contract on behalf of NHS Scotland was due to “unforeseeable” events. Statements from the Governments since defended the process, which it said are standard practice in the current pandemic. 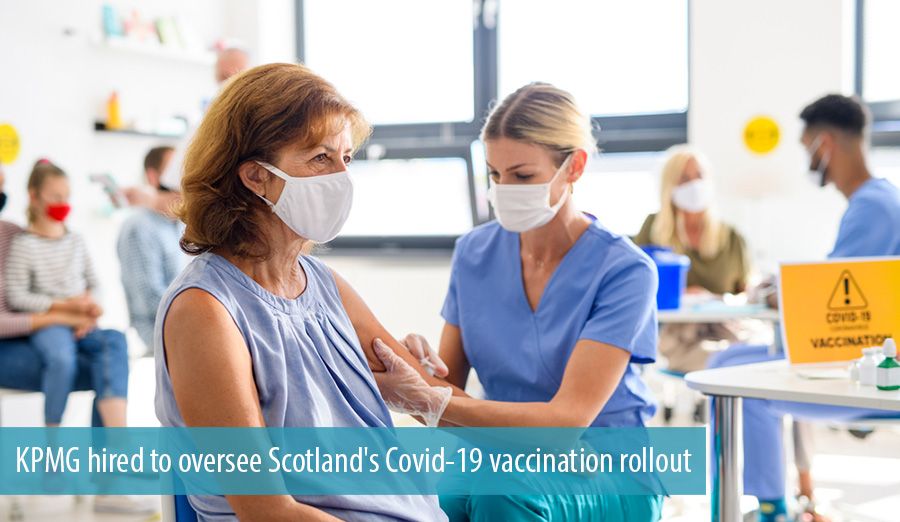 One Scottish Government spokesman told the media, “Given the scale of the unprecedented demand on health services and the need to run both the flu and Covid vaccination programme, KPMG were contracted to provide administrative support to NHS and government officials leading on planning and delivery. A number of contracts were awarded on a ‘direct’ basis due to extreme urgency. NHS National Services Scotland has since transitioned to other ‘open’ tender procedures whenever possible.”

Opposition figures have been quick to seize on the Government’s perceived faux-pas, however. Throughout the pandemic, public officials at local, national, and international levels have been lambasted publicly for their heavy spending on private contractors to oversee the state response to the ongoing health crisis.

Commenting on the contract, Scottish Labour’s Neil Findlay told The Sunday Mail, “This is extraordinary – we have the Scottish Government handing over millions to a private sector organisation to tell them how to roll out the vaccine. Do they not trust civil servants or the NHS to work out how to do this?”

Meanwhile, Scottish Green MSP Mark Ruskell added, “It might have been better for the Government to empower our local healthcare providers rather than splash millions on external consultants. The vaccine rollout is giving people hope right now and they won’t begrudge extra resources being brought in from the private sector. The problem is that the SNP and First Minister are failing to be upfront about these contracts.”

In the broader UK, state spending on consultants for Covid-19 work have been under the microscope for some time now. In late 2020, it was revealed that consultants had racked up a £175 million bill for their work during the pandemic.

Speaking in defence of the spending on consultants at the time, Management Consultancies Association CEO Tamzen Isacsson said, “Government departments have faced an unprecedented volume of workload during the pandemic and using external resources has enabled the government to work quickly and with intensity on major initiatives… At short notice the industry has been able to bring world class technical expertise and multidisciplinary capabilities and it has been our industry’s priority to strengthen the response and processes of clients and provide value for money.”

UK on the cusp of a transport revolution, as self-driving vehicles set to be worth nearly £42 billion by 2035

Is Northern Ireland safe to visit? (what you need to know)