Boris Johnson may delay the reopening of secondary schools next month as he prepares to finalise a “cautious” plan to ease England’s lockdown.

The UK prime minister will outline a “road map” for the lifting of restrictions once the House of Commons returns from its half-term break on February 22 and looks to start reopening schools from March 8.

However, people close to Johnson have said that, depending on the data, primary schools may open ahead of secondaries. “Nothing has changed, but it remains a slightly open question on whether we’re able to do all schools or whether it is a phased approach starting with primaries,” said one ally of the prime minister.

Another senior No 10 official added: “There are a series of different scenarios of depending on what the data looks like — from the most optimistic to the least — with different patterns and processes for unlocking depending on the data.”

Scientists have, in recent days, warned that reopening all schools simultaneously could push the reproductive number, or R number, above 1.

If we opened secondary schools and primary schools both at the same time, I suspect we would be lucky to keep the reproduction number below one

John Edmunds, a professor at the London School of Hygiene and Tropical Medicine and member of the government’s scientific advisory group for emergencies told ITV: “If we opened secondary schools and primary schools both at the same time, I suspect we would be lucky to keep the reproduction number below one.”

According to the latest data, the R number within the UK has dropped below 1 for the first time since July and is now between 0.7 and 0.9, meaning that for every 10 people with Covid-19, another seven to nine people will probably be infected.

Meanwhile, plans for a swift restart of face-to-face teaching at universities were in doubt as St Andrews joined Edinburgh and the London School of Economics in saying that it would keep the vast majority of teaching and assessment online for the remainder of the academic year.

Sally Mapstone, St Andrews vice-chancellor, on Wednesday told families that the news would be a “big disappointment” but certainly “offers more stability” to plan learning online.

Other universities said they would wait for government guidance on when to reopen campuses, with the expectation that students could begin to return after March 8 or the Easter holidays. But according to people familiar with discussions, many may not return to in-person teaching until later in the year.

In a meeting on Thursday, some vice-chancellors were told that the government was considering a staggered return across two months. It would mean that students taking practical subjects necessary to complete their degrees could return to in-person classes on March 8, followed by remaining practical students on April 12 and most others on May 17. 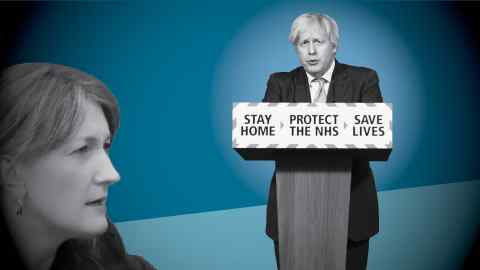 A vice-chancellor briefed on the proposals said this was one among several options and would meet with resistance from universities. “It’s just very late,” the person said.

Universities UK, the sector body, said the late return did not reflect its understanding of government plans, which were “still very much under active consideration”.

“It remains our ambition for as many students to be able to return to in-person learning in Covid-secure facilities as soon as public health conditions allow,” it said.

The Department for Education said it would produce “further details” on reopening education establishments, including universities, as part of the plan for leaving lockdown published in the week of February 22.

“Measures are currently in place to reduce transmission, [so] we have been clear that the majority of students should not return to universities,” a spokesperson said. “They should study from their current residence where possible until at least March 8.”