Boris Johnson on Monday set out a four-step road map to end all Covid-19 restrictions by mid-June, as chancellor Rishi Sunak prepared to extend emergency economic life-support measures until the summer.

Johnson insisted that “the end really is in sight” but Sunak’s Budget on March 3 will include measures to protect jobs and help businesses through weeks or even months of further disruption.

Johnson resisted calls from some Tory MPs to fully reopen the economy by the end of April, instead favouring a “cautious” approach. He said he hoped it would be a “one-way road to freedom” but denied he was taking a “buccaneering” approach.

In a sign of the pressure weighing on the prime minister, the government’s Scientific Advisory Group for Emergencies (Sage) released modelling studies by teams at Imperial College London and Warwick University with various scenarios for easing restrictions.

Even the more optimistic outcomes showed that more than 32,000 people could die between now and the end of June because vaccines will not provide complete protection against the disease and not everyone will have the jabs. The current UK death toll from Covid stands at 121,000, which includes 106,000 in England.

We cannot persist indefinitely with restrictions that debilitate our economy, our physical and mental wellbeing, and the life-chances of our children

Although none of the models followed the government’s road map exactly, one scenario from the researchers at Imperial, which took a similar path, estimated that a further 150,000-280,000 people would be hospitalised and 32,200-54,800 people would die between February and the end of June.

The phased unlocking of the economy starts with the reopening of schools on March 8 and ends — if all goes well — with the lifting of the last social restrictions on June 21.

Pubs and restaurants will reopen for outdoor service from April 12 while indoor hospitality and entertainment venues such as cinemas will open from May 17. Non-essential international travel will be subject to review and will not be allowed to restart before that date.

Sunak will on March 3 announce in his Budget that he is extending his furlough job support scheme — due to conclude on April 30 — until June to help businesses affected by ongoing restrictions.

Other measures including a business rates holiday are also expected to be extended. Johnson said: “We will not pull the rug out.”

Although some Conservative MPs wanted Johnson to move more quickly, the prime minister’s “caution” was welcomed by Keir Starmer, Labour leader. Johnson said he wanted the path back to normality to be “irreversible”. Johnson’s long-awaited easing road map, published in a 60-page document on Monday, contains four stages for ending harsh social distancing restrictions. Unlike past lockdowns, measures will be relaxed on a national level.

Johnson told MPs on Monday the plan would move England “cautiously but irreversibly towards reclaiming our freedoms”. He set out four tests for moving between each “step” of relaxation, notably the effectiveness and rollout of coronavirus vaccines, the pressure on the NHS, and the emergence of any new coronavirus variants of concern.

The prime minister admitted infections would rise due to ending lockdown. “There is therefore no credible route to a zero Covid Britain or indeed a zero Covid world. We cannot persist indefinitely with restrictions that debilitate our economy, our physical and mental wellbeing, and the life-chances of our children,” he said.

But Patrick Vallance, England’s chief scientific adviser, said that masks might be still be required in “certain situations” next winter but a “whole raft” of social distancing measures was unlikely. 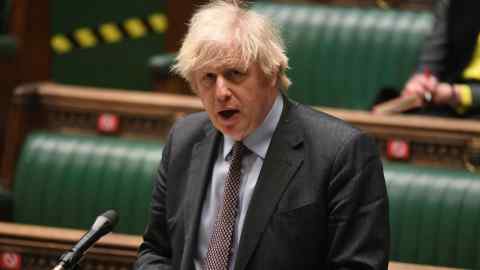 Each stage of the easing plan will have a five-week interval, to allow scientists to measure its effect over a month, followed by a one-week notification that further easing will take place. Scotland, Wales and Northern Ireland are due to set out their easing plans in the near future.

Many business owners in the leisure sector voiced concerns over the lack of clarity on what financial support would be offered in the Budget. Starmer demanded immediate clarity.

Simon Emeny, chief executive of pub group Fuller’s, said: “[May 17] is still three months away and for lots of operators in this sector it’s going to be a very painful 12 weeks, which for many will be a question of whether they can survive as far as that opening date.”

The government will also examine the use of vaccine passports. Johnson said “there may well be a role for certification” but cautioned “there are issues about discrimination, and to what extent the government can compel such use of certification”.

Covid: How should I talk to neighbours who break the rules?