Schools in south east London gear up for return of students

Ferry operator Stena has removed a new vessel from a service between Northern Ireland and Britain in the latest sign that post-Brexit trade rules are driving traffic away from the UK.

The company has instead deployed the Stena Embla in the Republic of Ireland to meet surging demand for direct shipments to and from mainland Europe as traders change supply chains to avoid additional paperwork in Britain.

Many companies that traditionally shipped goods between Ireland and Europe via Britain, a route known as the UK land bridge, have diverted this year to direct European shipments because of concern about procedures since the end of the Brexit transition period.

But Stena’s move was unplanned, coming only days before it was to introduce the Embla on its service between Belfast and Birkenhead in England, where it was supposed to replace one of its two smaller vessels on the route.

The Embla arrived in Belfast from China on January 2 but was reassigned to the south-eastern Irish port of Rosslare 11 days later in what the company described as a “Brexit-busting” move. It will replace a smaller vessel — one of two on a booming route between Rosslare and Cherbourg, France.

Rosslare port said there has been a near sixfold rise in traffic on its direct routes to the EU in the first two weeks of January compared with a year ago. By contrast, UK trade was “extremely quiet” in the same period, said Glenn Carr, chief of Rosslare port. “There’s certainly been a significant shift in the supply chain.”

Video: Opinion: why Brexit will become a negotiation without end

Stena said the Embla’s move was temporary, saying the vessel would be reassigned “before long” to the Belfast-Birkenhead route. “It’s the increased demand that we are seeing on Rosslare-Cherbourg and in particular the need for cabins for [truck] drivers,” the company said.

The company said it would continue to operate two vessels on the Belfast-Birkenhead route but noted that demand fell in the first two weeks of the year as the new trading regime kicked in. “The level of freight on that route is down 26 per cent,” it said. 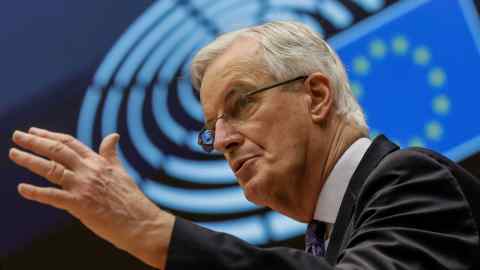 Stena said traffic between the Welsh port of Holyhead and the Republic of Ireland was down 70 per cent year-on-year in the first two weeks of 2021 while Irish traffic with Fishguard, Wales, was down 75 per cent.

Competitor Irish Ferries is also pulling one of its two ships off the Dublin-Holyhead route from Friday because of low demand.

The coronavirus pandemic has meant there are almost no tourists and families travelling between the UK and the island of Ireland because of restrictions, which has also hit demand.

About 150,000 shipments a year cross the UK land bridge and Rosslare ferry operators hope to capture at least a third of this trade over time for shipments directly to mainland Europe.

Partition 100 Years On: James Craig – an ordinary man with an extraordinary career

Exclusive: Nearly 80% back ban on hunting with dogs in Northern Ireland, survey finds

‘Do not travel from England to exercise in Wales’, First Minister says