The European Commission vice president is set to travel to London next week to discuss the trade issues that have emerged between Britain and Northern Ireland post-Brexit.

The crunch talks on the Northern Ireland Protocol were arranged amid mounting tensions over post-Brexit trade.

Speaking after the meeting, Sinn Féin’s Ms O’Neill said the vice president of the commission was “emphatic” that there was no intention by the EU to cause difficulty when it moved to suspend part of the Northern Ireland Protocol.

Ms O’Neill said Mr Sefcovic wanted “to state very clearly” that the EU had “no intention to cause any political difficulty” with the move last Friday.

“He put his hands up and said they had made a mistake and that they moved to rectify that mistake very quickly,” she said.

Ms O’Neill said Mr Sefcovic apologised on behalf of the commission and asked the leaders to judge the EU on its track record in terms of its support for the peace process both financially and politically.

“He was very gracious in his apology around that and recognised that it caused some tensions,” she said.

“I accept that apology in the way in which it was intended,” she added. 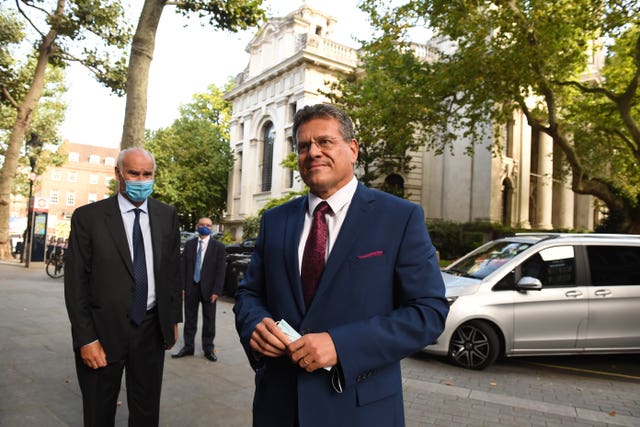 “He was very clear in terms of the rigorous implementation of the protocol and expects that to be adhered to but he did recognise we’re only six weeks into the protocol,” Ms O’Neill said.

“There are flexibilities inbuilt which he thinks haven’t even had a chance to work out yet.”

She welcomed his commitment to visit London to find ways to resolve the issues that have developed, adding that she believed it was a “very pragmatic and very constructive way” to move forward.

Earlier, British Prime Minister  Boris Johnson warned he is ready to override elements of the Brexit divorce settlement relating to Northern Ireland to prevent a trade barrier developing in the Irish Sea.

A fraught situation was further exacerbated last week when the commission briefly used Article 16 of the Northern Ireland Protocol to close the border to exports of the coronavirus vaccine from the Republic.

In the House of Commons, Mr Johnson suggested that he could respond in kind if there was no resolution to the issue of goods moving from Great Britain to Northern Ireland.

“We will do everything we need to do, whether legislatively or indeed by triggering Article 16 of the protocol, to ensure that there is no barrier down the Irish Sea,” he told MPs.

What are the local lockdown rules in Manchester, Glasgow, Bradford, Preston and Northern Ireland?