DEBORAH ROSS: I’m a celebrity… get me yet another boring travel show

DEBORAH ROSS: I’m a celebrity… get me yet another boring travel show

Joanna Lumley’s Home Sweet Home: Travels In My Own Land

Television has a monstrous appetite for new programming, but how do you feed the beast during a pandemic? By throwing various British celebrities at various parts of the British Isles, seems to be the answer, although not literally.

That would be weird and uninsurable. But I’m not saying I wouldn’t watch that, as I probably would. At least it would be, you know, different.

So which British celebrities were thrown – not literally, regrettably – at which parts of the British Isles this week? There was Cornwall And Devon Walks With Julia Bradbury, in which she hiked the Lizard Peninsula.

‘Walk with me. It’s going to be an adventure you will never forget,’ she promised. 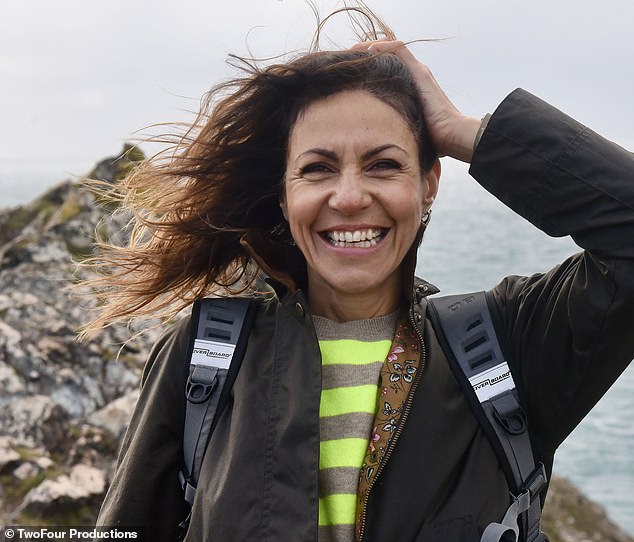 There was Cornwall And Devon Walks With Julia Bradbury (above), in which she hiked the Lizard Peninsula. ‘Walk with me. It’s going to be an adventure you will never forget.’

The scenery was beautiful, but we already knew that, as this programme was very much: Cornwall, Sticking Rigidly To The Tourist Trail. Mostly, as the wind whipped her hair and the sea crashed against rocks, I found myself hoping Captain Poldark would gallop past and liven things up a bit, but we had to make do with an item on choughs nearly dying out instead.

Bradbury declared everything ‘fascinating’, as is the nature of celebrity travelogues. Show the presenter a paving slab and they’d say the same, which does make it all fairly meaningless.

Naturally, she met ‘interesting people’, but her interest in these ‘interesting people’ was never convincingly feigned. She met a fella who makes giftware from serpentinite rock and it was, somewhat patronisingly: ‘Gary, you’re a very talented man. Keep it going. Thanks. Bye.’

There was more to this half-hour – a fisherman?, a fourth-generation pasty-maker? – but the truth is, and despite her promise, I have already forgotten.

On to Darcey Bussell’s Wild Coasts Of Scotland, which has the former ballerina and Strictly judge travelling the Inner Hebrides rather than the Outer Hebrides, where she might have bumped into Joanna Lumley. (‘What are you doing here?’ ‘I’m saying “fascinating” at everything!’ ‘Me too!’)

Bussell was journeying to Bute, as it’s where her grandfather holidayed, which seems a tenuous connection, but there you are. The beast needs feeding, remember. She added that she had ‘yearned’ to visit the islands ‘ever since I was a child’, which did make you wonder what had ever stopped her.

I’ve visited at least twice and don’t have any connection, tenuous or otherwise.

She started her journey on the Isle of Skye, where her ‘interesting people’ included a weaver, a scallop diver, a salt producer and a Scottish dancer. The usual suspects. She was delightful and charming and soothing, and made the people she met feel good about themselves.

You could just tell. But by now I was longing for someone to subvert the genre. She went plastic-picking on the beach and I was longing for her to say: ‘God, this is boring.’ Or: ‘I didn’t come all this way for this.’ But no such joy, alas.

The cumbersomely titled Joanna Lumley’s Home Sweet Home: Travels In My Own Land offers a whistle-stop tour that continued this week with visits to Harris (Outer Hebrides), Glasgow and Northern Ireland, even though her grandfather did not holiday in any of these places, as far as we know.

People do seem to bloom in Lumley’s presence, which is a gift and she is, by far, the most convincing feigner of interest. There is even the possibility she may not be feigning at all.

And some of this was quite fun, as when she visited the Scottish castle where she also made her first appearance in The New Avengers – I enjoyed the clips; my, Purdey could kick – and some of it was quite affecting.

In Northern Ireland she met her old friend Richard Moore, who was blinded as a boy by a soldier’s bullet, then went on to forgive that soldier, and is known as the Derry Lama. Here, I found my own interest wasn’t feigned. Amazingly.

I had high hopes for Extraordinary Escapes With Sandi Toksvig, as each week she would be joined by ‘a fabulous woman’ – proper chat! – but, basically, this came down to selling the luxury holiday rentals neither you nor I will ever be able to afford.

This first episode took us to Suffolk, where Sandi’s companion was Alison Steadman, and they stayed in an astonishingly converted Martello tower, a restored Tudor farmhouse and a 14th Century priory.

Steadman, we discovered, is wonderfully enthusiastic about clouds and mushrooms, which was enchanting, but we didn’t learn much more, as we then had to admire the view from some window or other, or marvel at a bedroom, or at how sympathetically one of the properties had been extended.

At one point the pair were sitting on a beach, cagoules zipped up, blankets over their knees, drinking prosecco from plastic goblets, and I thought: just let them talk and keep the camera running.

Just make it like Bob and Paul going fishing. That’s the programme we want. But it was not to be. Regrettably.

More shops and jobs and overhaul of travel in Plymouth

Flooding ‘likely’ as yellow weather warning is issued for Kent