Who had “male revue” in the betting pool for what type of Vegas show would be back onstage first? “Aussie Heat” won that distinction last weekend with socially distanced performances at the Mosaic Theater, essentially the first showroom to reopen on the Las Vegas Strip.

“Aussie Heat” is still advertised as “the most hands-on show in Las Vegas,” but the current version is decidedly hands-off. Showgoers are seated at tables six feet away from other parties and the stage is 25 feet away from the nearest table, with the men from down under staying put.

If you’re ready to bet on what will be the first major Vegas show to relaunch, some say it’ll be Spiegelworld’s “Absinthe.” That company submitted its 49-page plan to the Nevada Gaming Control Board just days after Gov. Steve Sisolak announced that certain venue and event capacity restrictions would be lifted as of Oct. 1, allowing showrooms and theaters to resume live entertainment events under a new set of safety protocols.

Producer Ross Mollison said it will take approximately three weeks for the “Absinthe” cast and crew to rehearse and prepare to put on the show once that plan is approved and Caesars Palace gives the greenlight for the Gazillionaire, the Green Fairy and all their friends and fans to return to the big white Spiegeltent.

“I always said we wouldn’t be the first show back and we’re not,” said Mollison, an Australian tipping his cap to the “Aussie Heat” revue. “But I want to be back and stay back, and if it takes longer than [three weeks], so be it. I’m more concerned with the next two years. We want to do it properly.”

Spiegelworld has written plans for its other Strip shows, “Opium” at the Cosmopolitan and “Atomic Saloon Show” at Venetian, but is waiting to submit them through their respective resort partners until “Absinthe” is approved or until some of the finer details of the new restrictions are resolved. Mollison is among a group of local producers who are hoping the 25-foot stage setback rule won’t apply to their uniquely intimate venues. (Go listen to this week’s Sun on the Strip podcast with David Saxe for more on this issue.)

There is language in the state’s new document “Nevada Guidance for Safe Gatherings” that provides an apparent work-around to that requirement separating performers from audience members: “Should they [performers] join spectator spaces, they must be included in the occupant capacity limit.” That could mean the total cast of entertainers would count in the audience cap of 250 people or 50% of the venue’s capacity, whichever is less.

The “Absinthe” tent has been reconfigured with cabaret-style tables instead of rowed seating and the show’s planners are determined to maintain the stage-in-the-round layout. That venue flexibility is but one of this show’s advantages in reopening; essentially, the lobby and bar areas of this “showroom” are outdoors. That makes a big difference in making people feel safe. 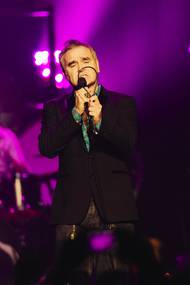 Morrissey performs at the Joint on Saturday, Jan. 2, 2016, in the Hard Rock Hotel.

“The great thing about theater is it’s very rigorous in the way it’s performed. People come at a certain time, they enter and exit in a way you have prescribed for them, they sit in a chair for a prescribed amount of time and behave in a prescribed way, all of which is dictated by the nature of the show,” Mollison said. “Everybody is working in good faith to make sure everybody is safe and that’s what we want, not just in working with the Governor and the [County] Commissioners and Gaming Control and the resorts, but with our artists and staff. I think we can do a great job and the Governor is going to be proud of us, and that’s the outcome I want.”

If “Absinthe” is the show that comes back ahead of the pack, it will do so under additional pressure and scrutiny. All eyes will be on the Spiegeltent to see how it goes, what works and what doesn’t.

“It’s incumbent upon us to do a great job so Cirque [du Soleil] can open, so the Colosseum can open,” Mollison continued. “I think [larger venues] are allowed to do 10% capacity but they’re going to need more than that to get the headliner business and we need headliners back. We need Allegiant Stadium operating, maybe at 10% initially, and they want to do a good job too so they can get higher numbers.”

In other Caesars Palace-based show news, “Morrissey: Viva Moz Vegas,” a five-night Colosseum residency originally planned for June and July, has been postponed until 2021. The former Smiths frontman and British pop culture figure has five new nights on the schedule for August 28 and 29 and September 2, 4 and 5 and tickets are currently on sale. With Usher’s new residency set to open on July 16, it’s clear the Colosseum and its partner Live Nation are betting big Vegas shows will be back by next summer, but there are tickets available for earlier shows. According to the Caesars Palace website, comic ventriloquist Jeff Dunham is slated for the Colosseum on November 15 and Sting could open his delayed residency on January 29. We’ll definitely be keeping a close watch on these potential shows.

Penn & Teller had been rumored for relocation from the Rio well before these COVID times, and with the off-Strip resort still shuttered (while being used as a TV shoot site), the future of the duo’s fantastic and long-running show is as uncertain as everything else. But that won’t stop the guys from hitting the stage across the pond in 2021. Penn & Teller’s “First Final UK Tour” will feature classics and never-before-seen tricks during eight live shows in June in Manchester, Birmingham and London.

Red Penny Arcade, a versatile jazz band fronted by recent podcast guest Anne Martinez, has taken up a Friday night gig at Notoriety Live at Neonopolis and this week’s special guest is none other than Colin Cahill, last seen scorching the stage as guitar-slinging cowboy Blue Jackson in “Atomic Saloon Show.” Find this new downtown hot spot at notorietylive.com.

Also this weekend, Strip and Broadway veteran entertainer Randal Keith (“Les Miserables,” “Showstoppers,” “Spamalot,” “Baz”) performs his tribute to Robert Goulet Friday and Saturday at the Vegas Room and you can make your dinner and show reservations at thevegasroom.com. 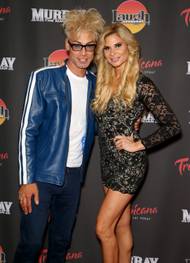 Mondays Dark returns on the 12th with the music of Michael Jackson performed by Vegas favorites such as Jackie Wiatrowski, Justin Rodriguez, Brandon Godfrey and Sean Stewart, Elisa Fiorillo and of course Mark Shunock and Jassen Allen, but that livestream (at 8 p.m.) is the first of several shows coming to you from the Space next week. Mediterranean folk guitar star Pavlo performs at 6 p.m. October 15 ($30), digital sensation Ali Spagnola performs a concert and brings her interactive “Power Hour” drinking game to your screen at 6 p.m. October 16 ($19.99) and Ballet 120 presents “A New Age of Dance” at 5 p.m. October 18 ($20). Check out all these pay-per-view shows at thespacelv.com.

For the first time ever, Piff the Magic Dragon is inviting his audience to meet up for a brand-new interactive show experience, live and online. Book your spot for the 7 p.m. show October 16 or at 4 p.m. October 17 by visiting piffthemagicdragon.com.

In celebration of Hispanic Heritage Month, Opera Las Vegas will present a virtual recital featuring acclaimed soprano Cecilia Violetta López with pianist Nathan Salazar on October 17 at 6 p.m. López previously performed in the OLV production of “The Elixir of Love” last year and is known for signature role of Violetta in “La Traviata.” Tickets for the online presentation are $25 and more information can be found at operalasvegas.com.

In romantic news, comic magician Murray Sawchuck (of his own “Murray the Magician” show at the Tropicana and “Fantasy” at Luxor) and host and dancer Dani Elizabeth (of “Crazy Girls” at Planet Hollywood) were engaged last month, with Sawchuck popping the question alongside the couple’s rescue pups in a cabin on Mount Charleston. And less than week earlier, singer Dai Richards (of “Tenors of Rock” at Planet Hollywood) and dancer Olivia Nicole (of “X Country” at Harrah’s) tied the knot. Congratulations to all!

Former Flamingo headliner Olivia Newton-John has established an eponymous foundation focused on funding cutting-edge research and treatment programs to battle cancer. The legendary Aussie entertainer has been championing the Olivia Newton-John Centre run by Austin Health in Melbourne for 15 years and is taking the mission to greater heights by seeking global support through the new foundation’s partnership with Charities Aid Foundation. “I have been so inspired by the positive impact that the ONJ Centre has made on people’s lives that I am now expanding my vision,” she said in a statement. “I have lived beyond cancer for the past 28 years and I have learned so much about the importance of holistic care. On my breast cancer journey, I have always found incredible benefit from the use of various natural therapies, particularly with plant-based medicines. … The ONJ Foundation will find and fund individuals and organizations doing exciting and life-changing research, to challenge conventional thinking, taking us closer to a world beyond cancer.” For more information, visit onjfoundation.org.

Mum claimed she couldn’t walk as she tried to con NHS out of £5.7m…then went on holidays around the world