Authentic has staved off a late charge from favorite Tiz the Law to win the 146th running of the Kentucky Derby.

The victory for legendary trainer Bob Baffert’s Authentic eliminates the possibility of a Triple Crown victory for Tiz the Law, who won the Belmont Stakes in a commanding performance in June.

The Kentucky Derby, traditionally the first race in the Triple Crown, ran four months later than usual, and without paying spectators at Churchill Downs in Louisville, due to precautions taken in the coronavirus pandemic.

Tiz the Law had been the heavy favorite at 3-5 odds, while Authentic was at 8 to 1.

Authentic, with jockey John Velazquez up, broke slowly from the far outside but went to the lead by the first turn.

The colt didn’t let up despite pursuit from NY Traffic and Storm The Court, with Tiz the Law giving chase by the far turn. 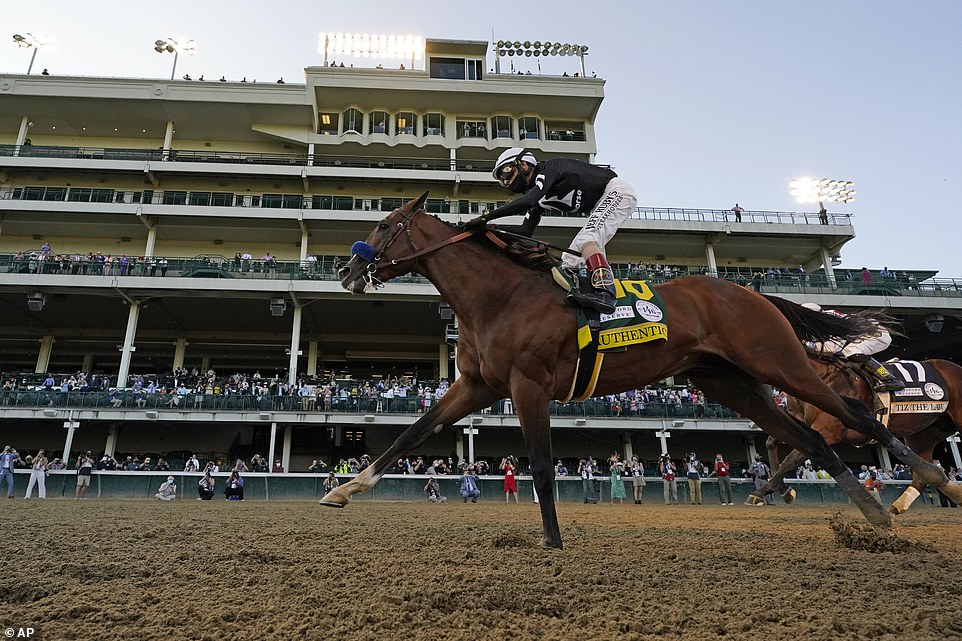 Jockey John Velazquez riding Authentic crosses the finish line to win the 146th running of the Kentucky Derby, beating out #17 Tiz the LAw who made a late charge in the homestretch 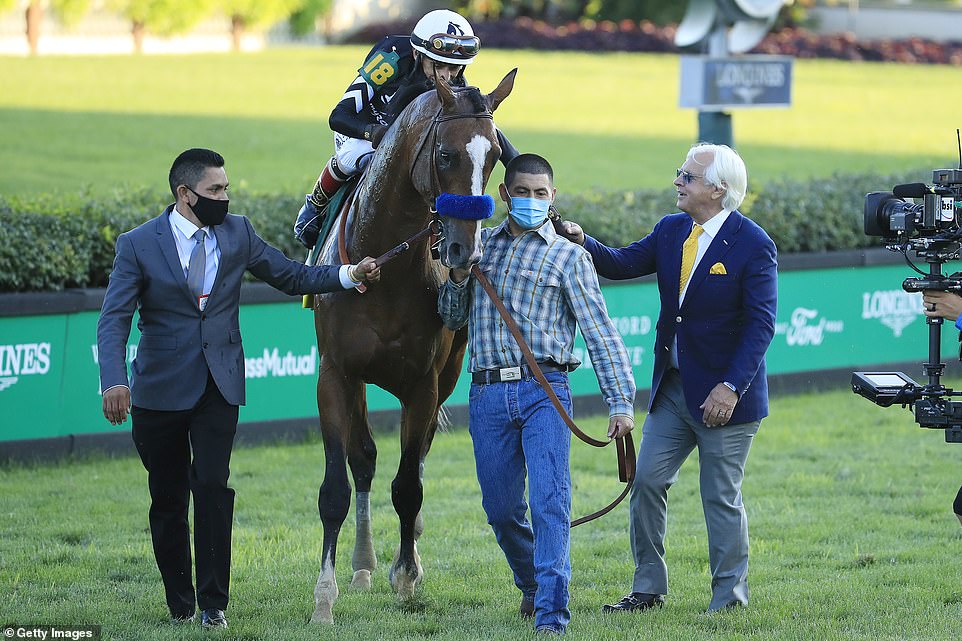 Jockey John Velazquez, aboard Authentic, celebrates with trainer Bob Baffert (right) after winning the 146th running of the Kentucky Derby at Churchill Downs on Saturday 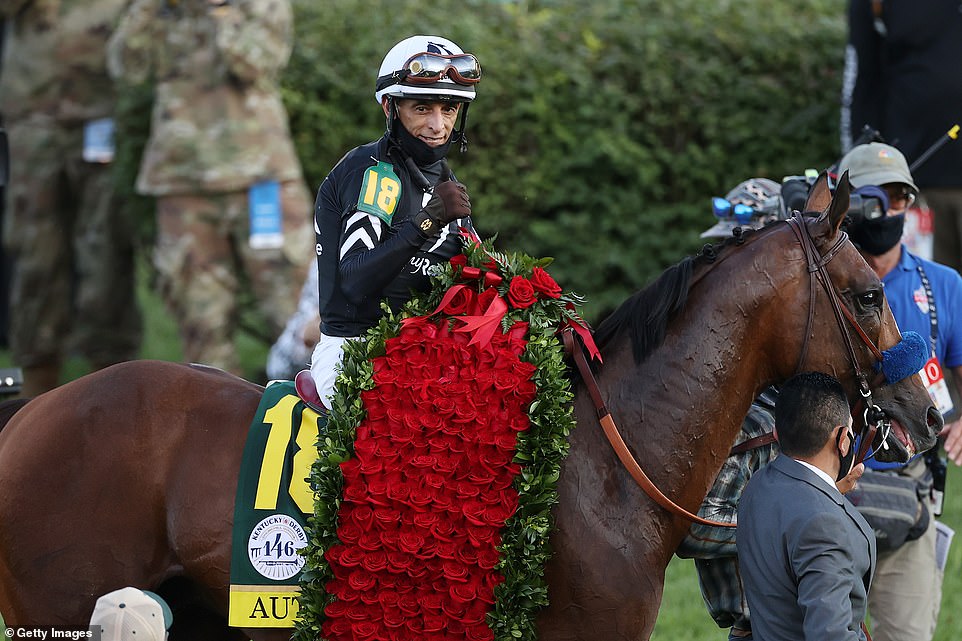 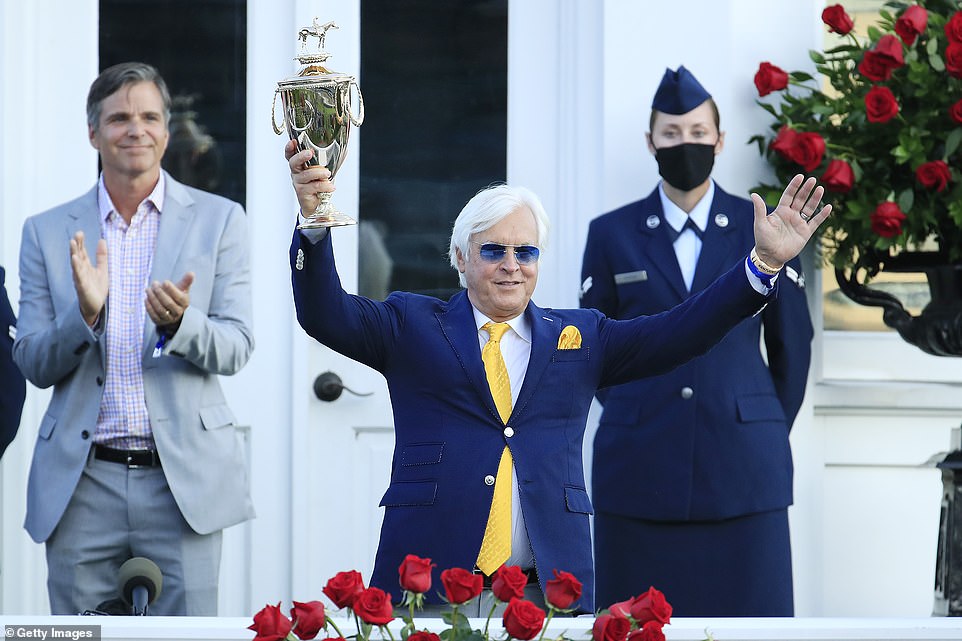 Tiz the Law, breaking from the No. 17 post, stalked the pace before making his move to join the leader Authentic in the far turn, coming out of the turn into the homestretch nearly neck-and-neck.

Coming down the homestretch, hard-charging Authentic refused to be beaten, pulling ahead to win by barely one length.

It is Baffert’s sixth Kentucky Derby win, tying him with Ben Jones for most all-time among trainers. Baffert previously won the Kentucky Derby with Triple Crown winners American Pharoah (2015) and Justify ( 2018) as well as Silver Charm (1997), Real Quiet (1998) and War Emblem (2002).

The Derby was run even as armed Black Lives Matter militias marched around the gates surrounding Churchill Downs, chanting Breonna Taylor’s name and demanding that the famed race be cancelled. 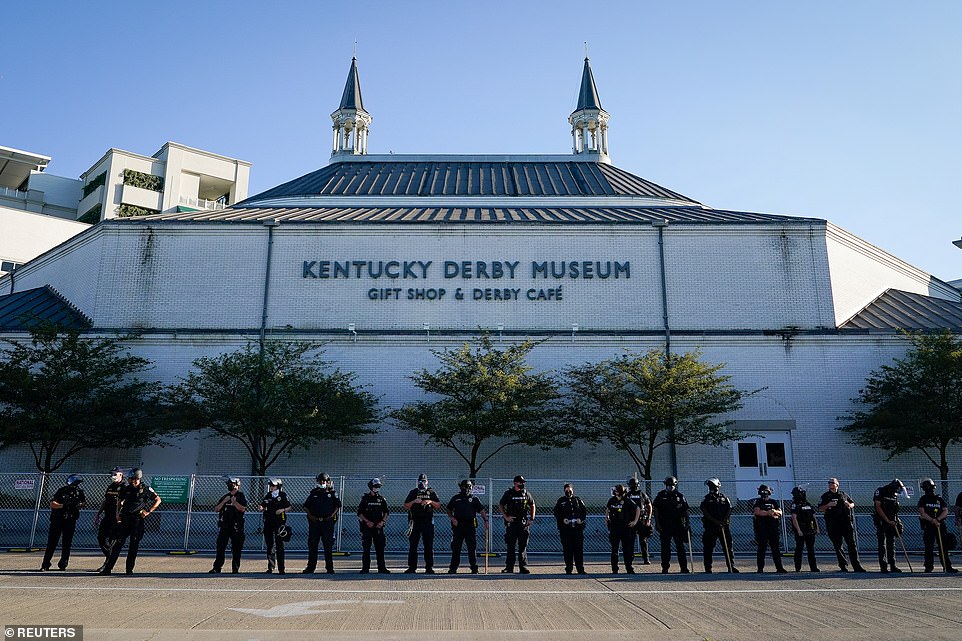 Louisville Metro Police officers line the street as members and supporters of an all-black militia group called NFAC hold an armed rally outside Churchill Downs on the day of the 146th running of the Kentucky Derby in Louisville, Kentucky 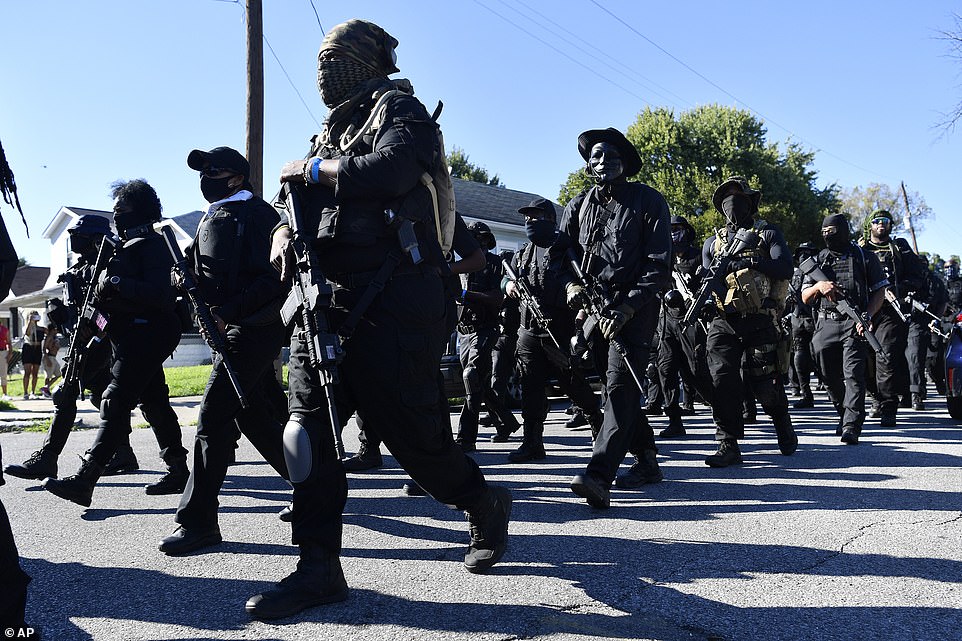 Members of the NFAC, a black militia, march to Churchill Downs racetrack before the 146th running of the Kentucky Derby 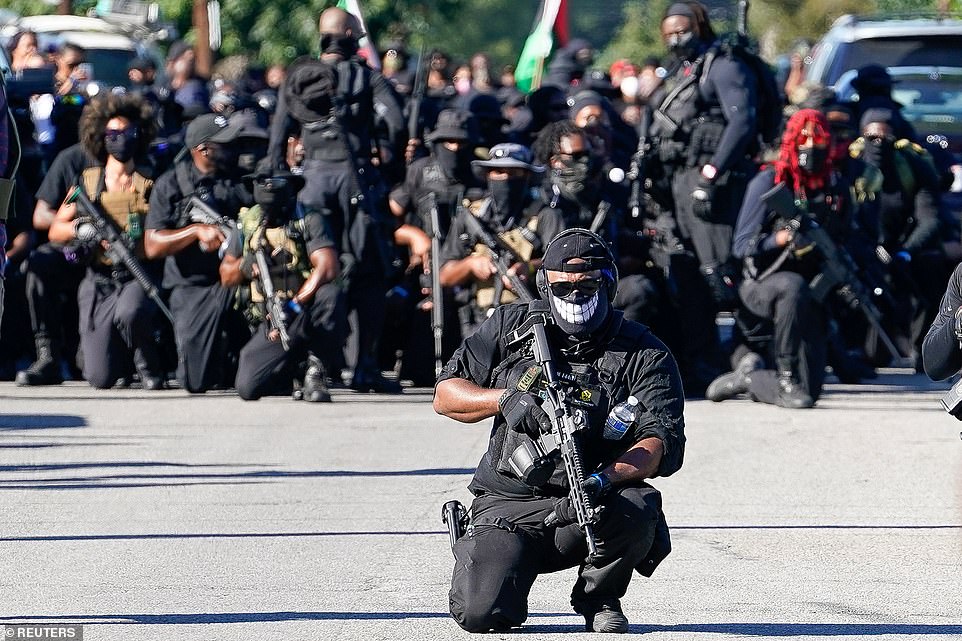 The protesters marched two miles from a city park and circled the track on the front and back sides. They chanted ‘No Justice, No Derby!’ and carried signs imploring people to say Taylor’s name 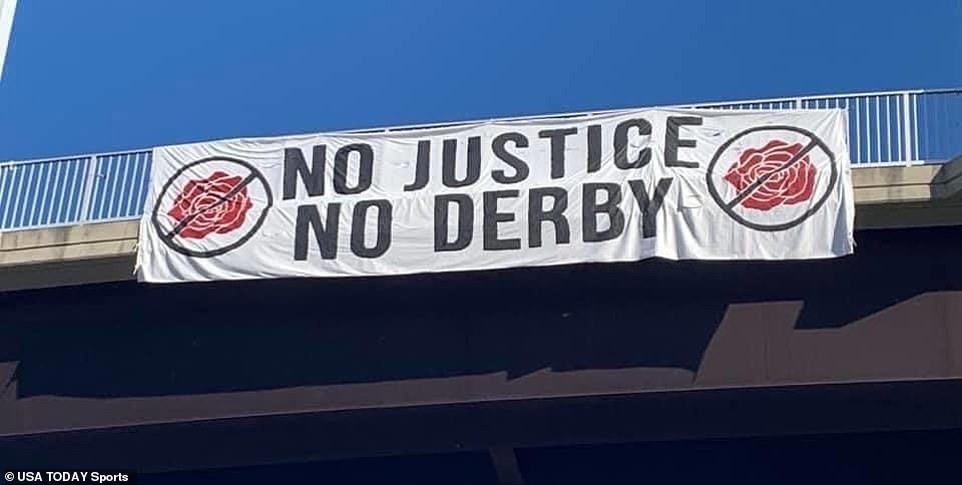 A banner that reads ‘No Justice, No Derby’ was hung on the Big Four Bridge by Waterfront Park before the race

Protests have occurred for 101 days in Louisville, with calls for police to be charged in Taylor’s shooting death during a botched narcotics raid on March 13.

A recent demonstration near the historic track resulted in 64 arrests, and more protests were expected around the venue.

The protesters marched two miles from a city park and circled the track on the front and back sides. They chanted ‘No Justice, No Derby!’ and carried signs imploring people to say Taylor’s name.

‘What are we celebrating?’ one of the organizers, Brittany Wiley, told the crowd as it gathered. ‘We don´t want mint juleps. We want justice. We’re not partying. We’re protesting. No justice? No Derby.’

Inside the gate, police in riot gear with clubs – some on horses and some with armored military vehicles – were following along with the protesters from the inside. 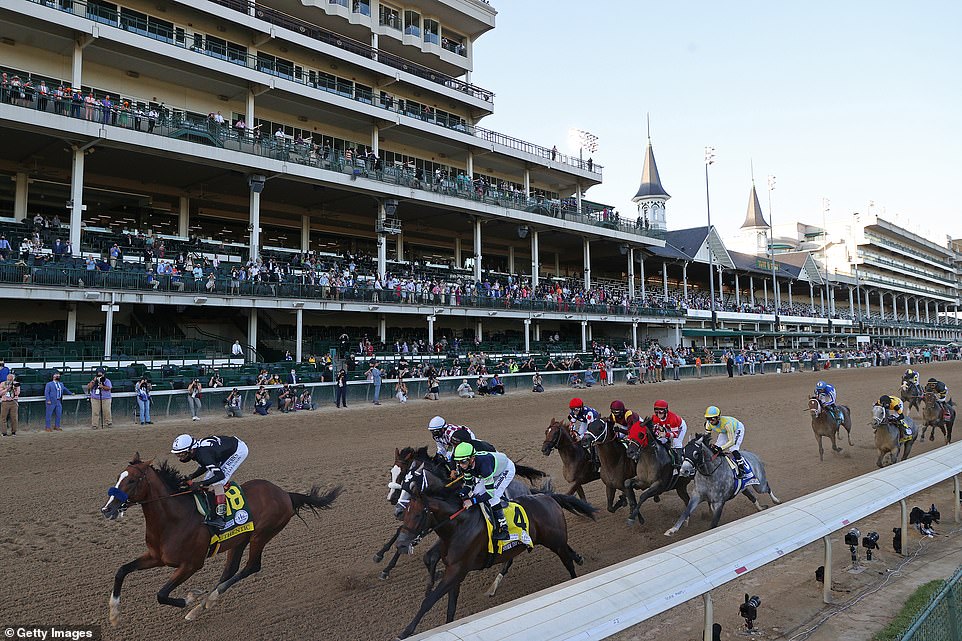 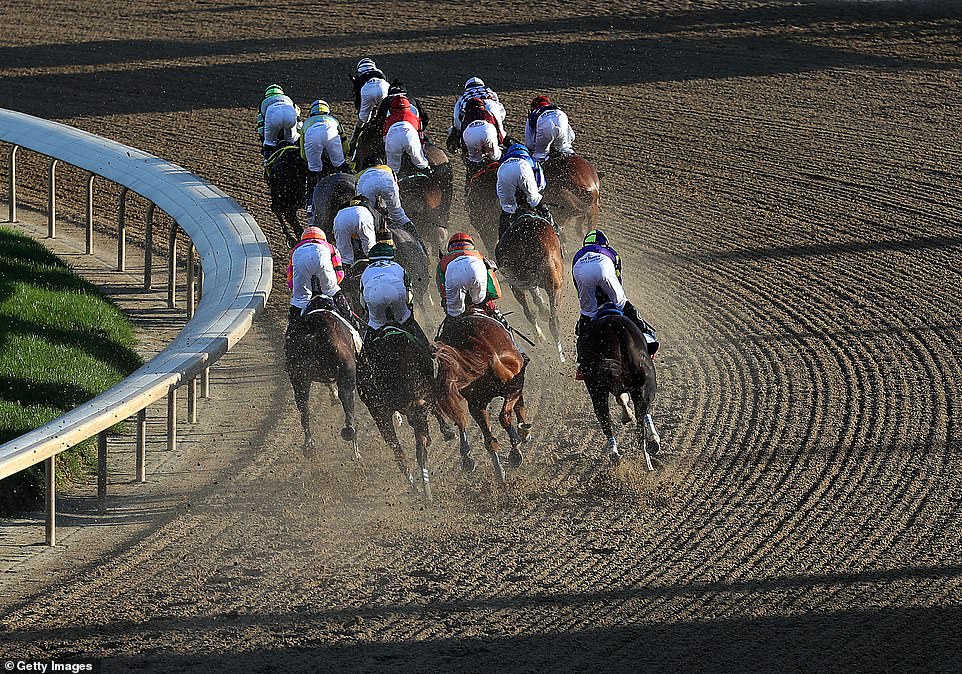 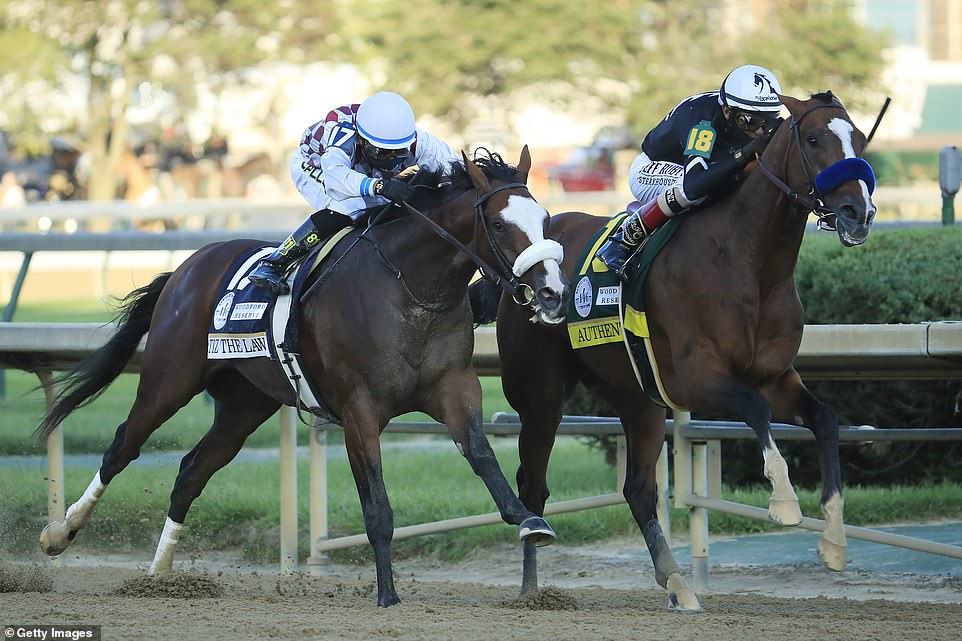 Authentic #18 ridden by jockey John Velazquez leads Tiz the Law #17, ridden by jockey Manny Franco, down the stretch on the way to winning the 146th running of the Kentucky Derby at Churchill Downs 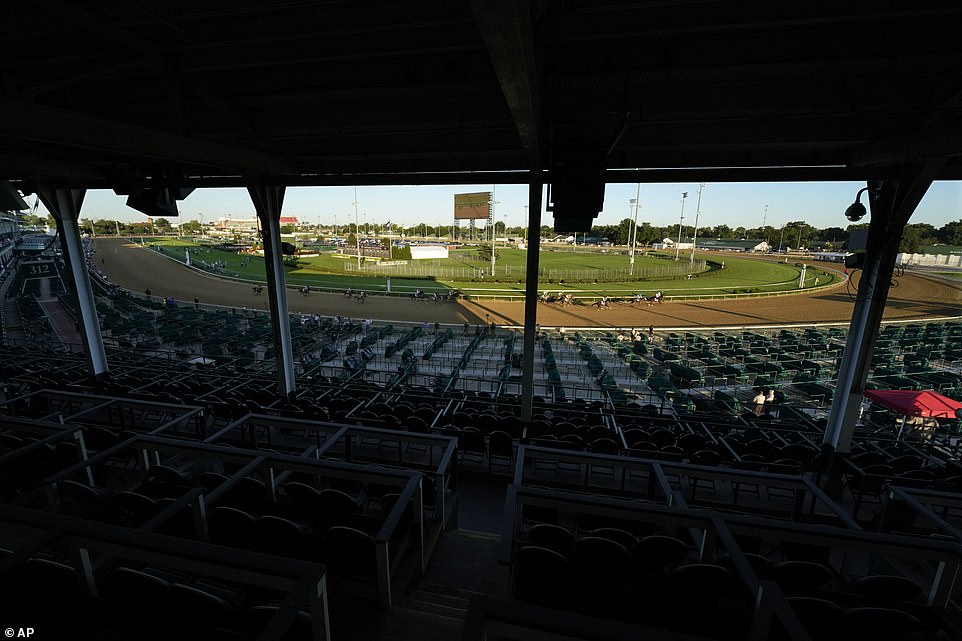 The grandstand remains empty during the 146th running of the Kentucky Derby at Churchill Downs. This is the first year that paying spectators have been barred from attending the legendary race 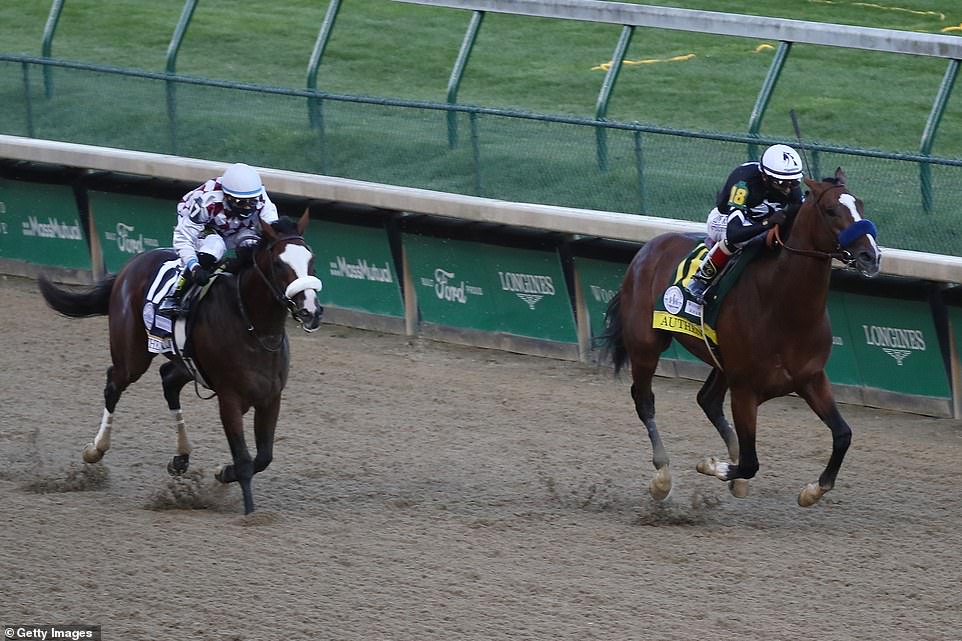 Authentic (right) ridden by jockey John Velazquez runs down the stretch to win the 146th running of the Kentucky Derby at Churchill Downs, defeating a late charge from favorite Tiz the Law (left) 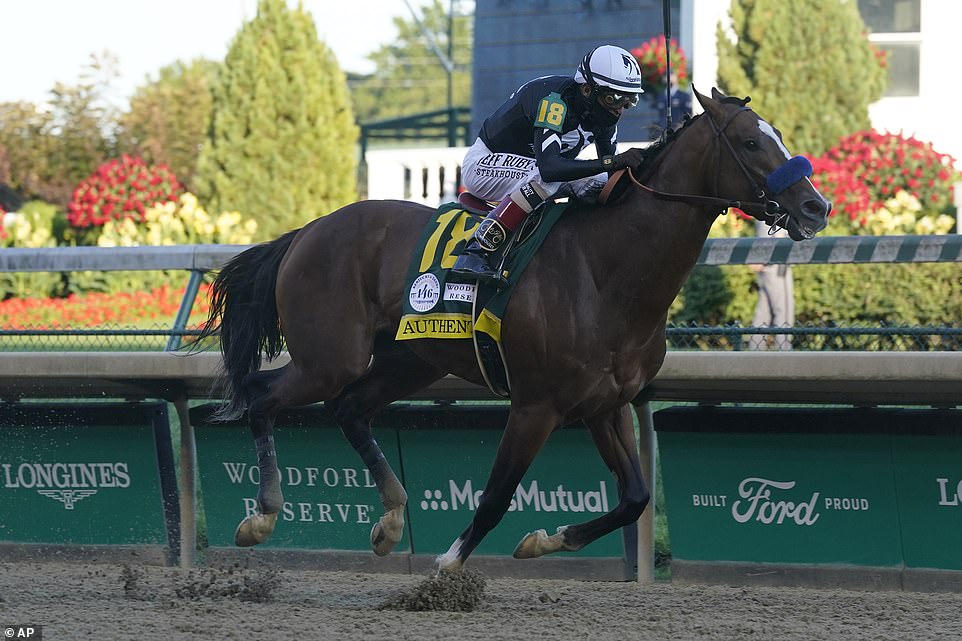 In a break with tradition, Kentucky Governor Andy Beshear was not in the winner’s circle Saturday with the triumphant owners at Churchill Downs.

Instead, the Democratic governor watched the race from home, just like all the race fans who were unable to pack the stands and the infield because of the coronavirus pandemic.

It’s another tradition falling by the wayside because of the pandemic. This year’s race was moved from May to September because of the coronavirus, and this was the first time spectators were not allowed to attend.

This would have been Beshear’s first Derby trophy presentation as governor, though he watched his father, Steve Beshear, do the honors during two terms as Kentucky’s governor. Andy Beshear was elected last year, ousting incumbent Republican Governor Matt Bevin.

Earlier in the day, an armed group of about 200 pro-Trump and pro-police demonstrators called ‘The Angry Vikings’ assembled at Cox Park in Louisville, vowing to defend the city from BLM activists. 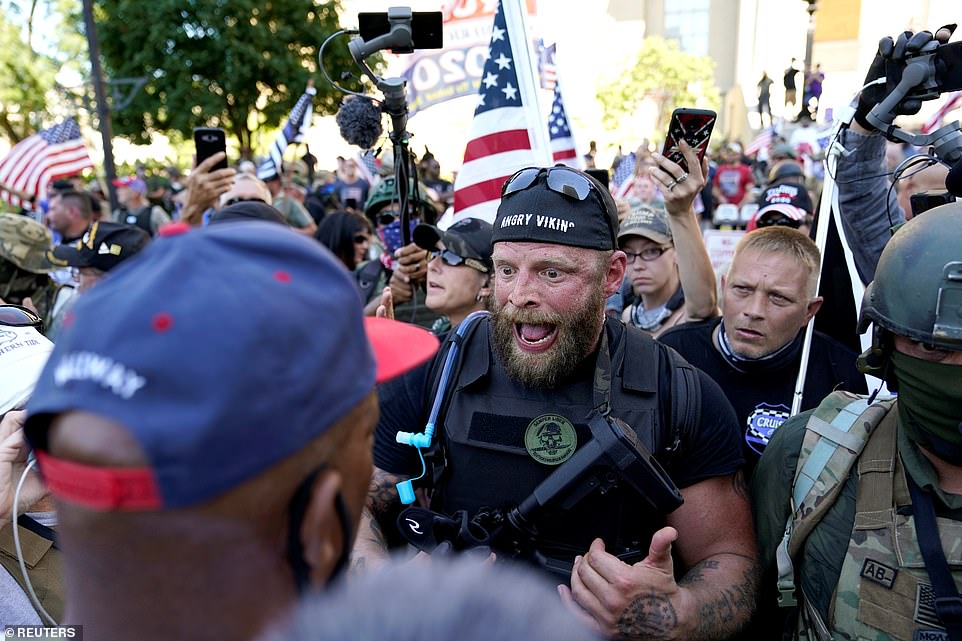 Earlier in the day, members of a Trump-supporting militia rallied vowing to protect Louisville from left-wing protesters 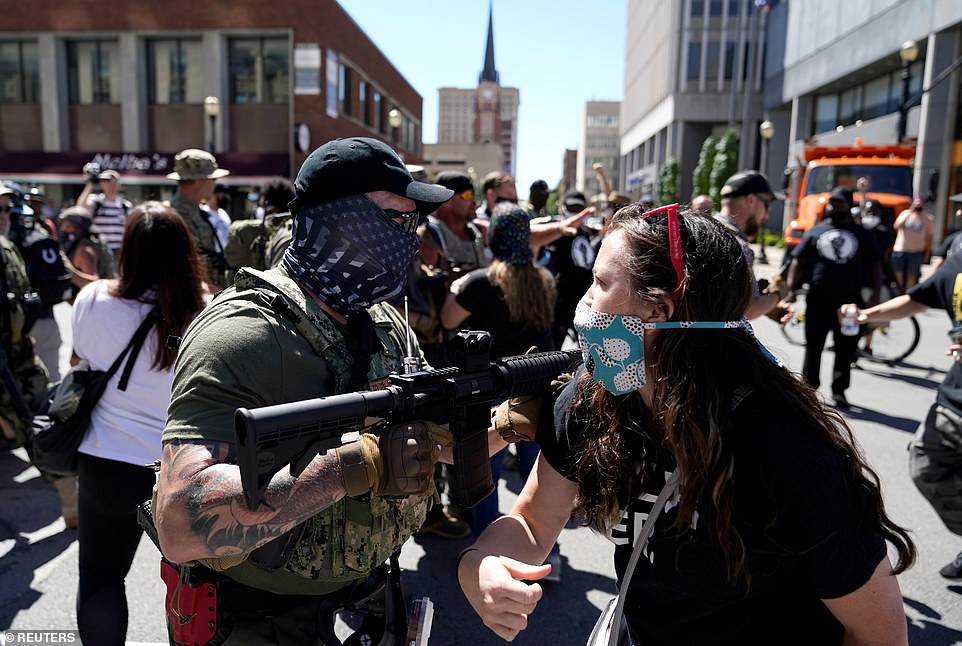 Black armed militias NFAC and Until Freedom had announced plans to demonstrate near the Churchill Downs Racetrack on Derby Day, one of the city’s biggest events of the year, in response to officials’ handling of the case.

Taylor, 26, was shot dead during a botched police raid in her apartment in March. The three officers involved in her death have not been charged. Her death has fueled tense demonstrations for 100 consecutive days in the city.

Some of the counter-protesters, brandishing pistols and long guns, squared off with a group of BLM supporters and got into shoving matches. People on both sides screamed, faces inches apart.

After about 45 minutes, police cleared the people from the park, but the protests outside Churchill Downs continued.