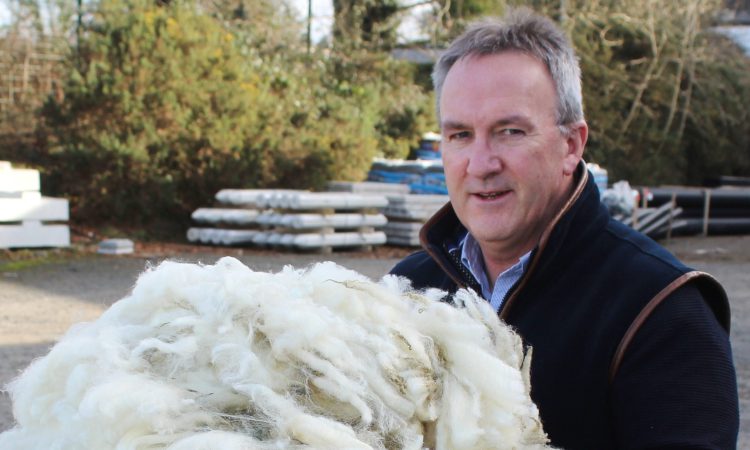 It’s largely agreed that wool has been the agricultural commodity hardest hit by the ongoing pandemic.

“The minister has asked the organisation involved in the meeting to put a costings package together.

There was a general recognition that, on animal welfare grounds alone, flock owners should receive a payment that would at least cover the costs of shearing their sheep.

Kelly confirmed that the minister has a budget from which money can be drawn down to support the wool sector.

“But he has to make his mind up before the end of March otherwise the money goes back to London,” he added.

The Ulster Wool chairman pointed out that most of the wool produced on the island of Ireland is destined for carpet production.

“Woollen carpets are amongst the world’s most hard wearing and enduring floor coverings. As a result, they are in strong demand within the hotel sector, on cruise liners, in casinos and restaurants, basically any location dealing with a large footfall of people on a regular basis.

“Unfortunately, these are the very same sectors that have been hardest hit by the Covid-19 pandemic.

Hotels have stopped all new build and refurbishment projects. The same can be said for casinos and cruise line operators.

According to Kelly, the market for wool crashed in the wake of the first lockdown introduced last March.

“We responded by halting all auctions between February and June last year. By the time they recommenced, an 11 million kilogram stockpile of wool had built up in stores around the UK, including here in Northern Ireland,” he said.

“Most of this wool has now been sold but at prices that were 50% below where the market was at the beginning of 2020.

And, of course, there was also the challenge of dealing with new season wool coming into depots as the summer and autumn of last year progressed.

“The current stockpile of wool has been reduced to four million tonnes. But this is still a heck of a lot of product that is overhanging the market,” he said.

Kelly went on to explain that Ulster Wool’s costs per kilogram to process the wool had increased due to a lower wool intake. Meanwhile, average wool prices have fallen sharply.

The average price achieved for Ulster Wool at auction has been 46p/kg through for the 2020 season; this compares to 92p/kg pre-Covid-19.

“We have continued to accept and grade every consignment of wool delivered to Muckamore and we want producers to keep on sending their wool to Ulster Wool.

“But the market crash of 2020, due to the Covid-19 pandemic, has had a major impact on the Ulster Wool operation.

First off, the business has incurred a loss on every kilogram of wool it has handled over the past 12 months; this will have a direct impact on producers’ wool cheques for their 2020 wool.

“This is not a sustainable position to be in, from both an Ulster Wool perspective and its individual farmer-shareholders,” he concluded.

Coronavirus: ‘Too slow’ contact tracing for over 8,600 cases coincided with Scotland’s second wave

Roberts to swear in yet another president who opposed him