The Department of Health has reported 12 further deaths of people with Covid-19 and 1,024 new confirmed cases.

Of those being treated in hospital with the virus, 178 are in intensive care – up one from yesterday.

The department said all 12 of the deaths occurred in February while the median age of those who died was 76, and the age range 60-90 years. 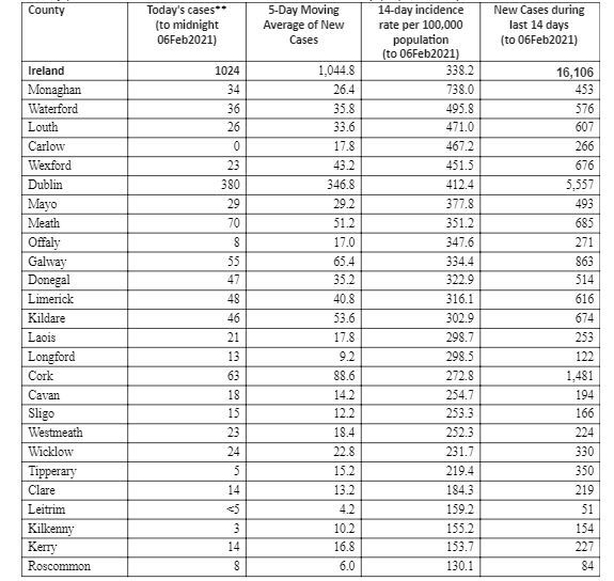 In Northern Ireland, there have been a further nine deaths of people with Covid-19, seven occurring during the past 24 hours. It takes the official death toll there to 1,931.

There are 585 confirmed coronavirus patients in hospital in the North, with 66 in ICU, 57 of whom are on ventilators.

Average seven-day infection rate per 100,000 for Northern Ireland is 160.2, the lowest since 8 December. The highest rate remains in Mid Ulster on 261.7, while the lowest is in Lisburn and Castlereagh on 88.2.

We need your consent to load this rte-player contentWe use rte-player to manage extra content that can set cookies on your device and collect data about your activity. Please review their details and accept them to load the content.Manage Preferences

It comes as Minister for Foreign Affairs Simon Coveney said if there is “a serious problem” with UK travellers coming through the Republic as a backdoor to avoid quarantine the Government will “sort it out”.

Speaking on RTÉ’s This Week, he said: “If that is being abused by UK citizens coming back from other parts of the world to try to take advantage of that issue, we will close that door by ensuring there is communication with airlines and the UK authorities to make sure they exactly know where people are coming from through an Irish airport.”

He also said the UK authorities need to ensure that people landing at British airports are treated in a way that is consistent with public health advice.

He went onto say Ireland has “very similar quarantine” rules as the UK.

Mr Coveney said there is no resistance coming from the Irish Government in sharing data and information.

Adding that if there are data-sharing issues that need to be worked out, the Irish Government will talk with the UK authorities.

He said the key issue is that those transiting through airports do not present a risk according to the World Health Organization.

Dr Holohan said that now was not the time to adopt a “wait and see” approach.

He said that people who feel unwell over a weekend often delay calling their GP but this wait and see approach should not be adopted at the moment and he urged people to seek medical advice at the earliest opportunity.

He also said people should not leave their houses if they have any cold or flu-like symptoms, in a bid to limit the spread of Covid-19.

Professor Philip Nolan of the National Public Health Emergency Team (NPHET) said the country is making steady progress in the fight against the disease after a very challenging surge.

He said if progress continues to be made, infections could be driven down to low numbers and the scene could be set for a phased, cautious, and controlled resumption of priority activities.

Brexit: what happens to the UK on 31 December, deal or no deal? | Politics